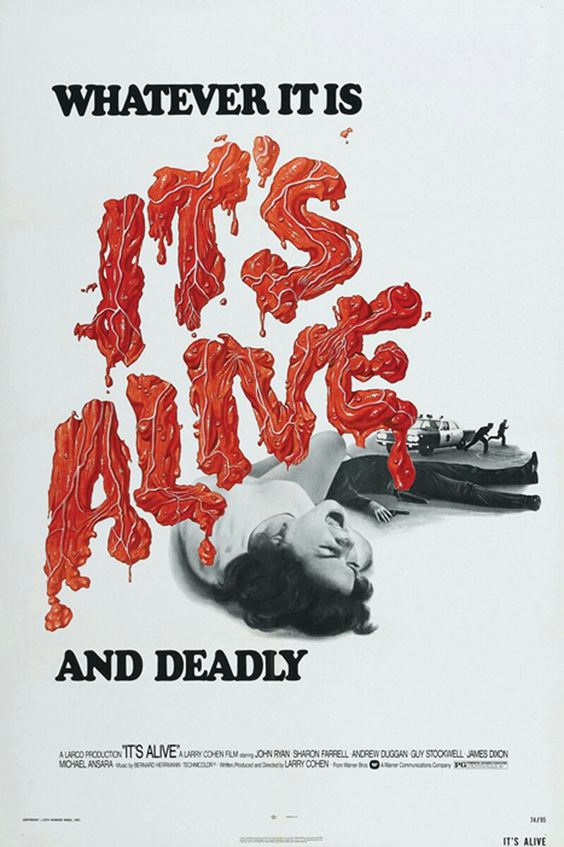 Larry Cohen has made a name for himself for producing offbeat horror movies, and this story of a killer deformed baby certainly belongs in his filmography. It’s Alive is a huge highlight of the horror genre, and one that doesn’t get the praise that it deserves. The film is notable amongst other films of similar plotting because of the way that it fully explores it’s premise. Rather than focusing on the monster and the murders, Cohen sees fit to show the audience the effect that the birth of a murderous monster has on the family at the centre of the story, the government, the family friends and various other entities; all of which helps to aid the film in it’s bid to be a complete horror thriller. Of course, the film is too silly to be truly touching, but the idea of trying to get the audience to empathise with the characters in this sort of movie is nice, and it adds to kitsch campness of the movie, which does it no end of favours in this kitsch fan’s opinion.

The acting adheres to the typical, and much loved, B-movie styling and that is another plus point to add to this movie’s resume. John P. Ryan in particular is superb as the upset father, and we see him go through a range of emotions in response to the birth of his ‘son’, which is a treat indeed. The script isn’t the greatest work of art ever to be brought to the screen, but it’s always inventive enough to ensure that the action stays interesting and It’s Alive hardly suffers from becoming trite and boring. The creature effects aren’t the best ever seen, but Larry Cohen hides this fact by never completely showing the creature. This hampers the movie in a way, as it will no doubt get on many viewers’ nerves as seeing the monster is normally a highlight of this type of movie; but on the other hand, seeing the monster usually results in disappointment – so at least Cohen’s film stays away from that! On the whole, while this film will do nothing for fans of serious art movies; horror fans, particularly very B-horror fans, will be in heaven. Highly recommended!