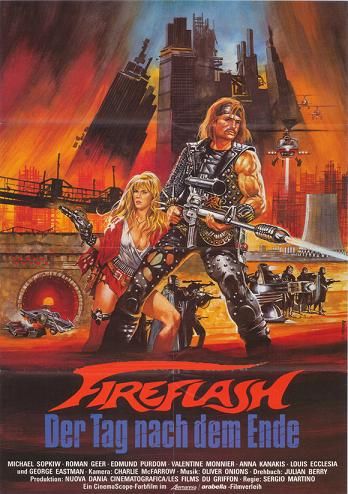 Twenty years after a nuclear holocaust ravaged the Earth, the Euraks and the Pan American Confederacy continue the battle for supremacy. Mercenary Parsifal (Michael Sopkiw) is recruited by the Confederacy to try and locate the only fertile woman on Earth, hidden somewhere in the ruins of Manhattan. He is joined on his quest by warriors Bronx (Paolo Maria Scalondro) and Ratchet (Romano Puppo), pretty blonde Giara (Valentine Monnier), dwarf Shorty (Louis Ecclesia) and hulking half-man/half-monkey mutant Big Ape (George Eastman).

One of many Italian post-apocalyptic action flicks to follow in the wake of Mad Max and Escape From New York, Sergio Martino’s 2019: After The Fall Of New York is a wholly unoriginal, shoddily made, poorly acted crap-fest full of really badly choreographed action scenes, lousy special effects, manky props, amusing costumes, and seriously dumb characters. Opening with an unconvincing miniature model of nuked New York and ending with the launch of an equally cruddy model spacecraft, with all manner of cheap-jack nonsense packed in between, one might imagine the film to be hugely entertaining as a result, but Martino’s uninspired direction and his cast’s abysmal performances suck the life out of even the most silly of scenes