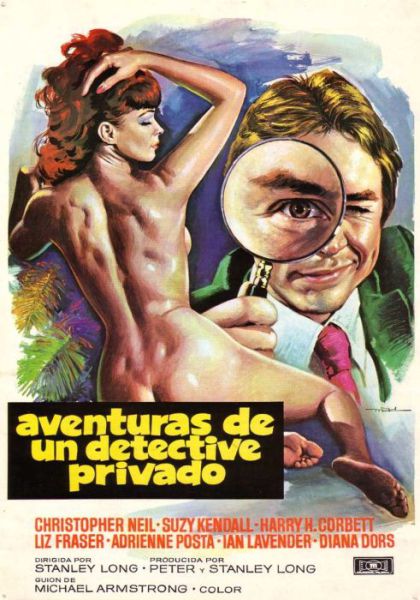 Adventures of a Private Eye introduces us to a number of dense, almost unsolvable mysteries: has Britain ever produced a worse director than Stanley A. Long? why does Long not know, despite spending over 15 years in the film business prior to making this film, how to pace a sequence or end one on a proper punchline? why does he hire enormously talented actors like Harry H. Corbett, Irene Handl, Diana Dors, Jon Pertwee, Anna Quayle and Julien Orchard and give them absolutely nothing to do? why did 70s English audiences flock to see absolute rubbish like this in their droves? It can’t be the sex, as compared to the likes of the then-contemporary Swedish and French cinema, there’s hardly any flesh on display here, and none of it is even remotely erotic; nor can it be the comedy, which is a lot of things (incompetent, mean spirited, offensive, banal, ignorant, half-hearted, old hat) but not even remotely funny; it can’t be the story, which makes British comedy capers of the period which were less successful at the Box Office (House in Nightmare Park for example) look like Chinatown.

To be fair, Private Dick is a smidgeon better than the first entry into the series, purely because it actually has some kind of story as opposed to being a merely string of idiot vignettes. And the film does look good, especially on the new Region 2 Dvds, where the gorgeous lighting of the interiors and night time scenes is genuinely impressive (catch the shot of photographer Scott walking towards the mansion after dark, the screen awash with breathtaking colours). And Adrienne Posta does a mean Liza Minelli impression, supported would you believe by the boy from the Tomorrow People playing a Bugsy Malone-type Italian gangster, all school play amateurism and elbows.

“Bloody amateurs” is a phrase a police inspector in the film uses about private eyes, and it’s apt given the star of the movie can’t act: Christopher Neil is a nullity into oblivion as the title character, taking over from Barry Evans (who instead chose to appear in the flop sex comedy Under the Doctor). Yet another document on the sexual, spiritual and social dereliction of the UK in the 1970s. It does bear the distinction of having a cameo by Shaw Taylor, tipping the wink to TV’s then current Police 5, which just goes to show how narrowly culturally specific an audience of TV morons the producer was aiming at with this.