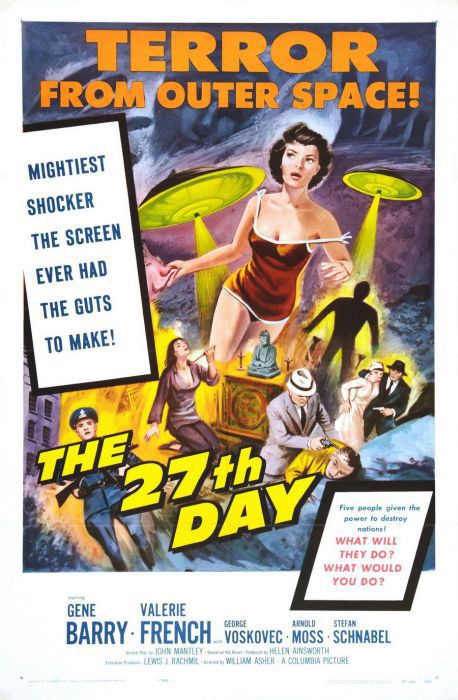 Grossly undervalued, under-marketed and overlooked piece of Scifi. Intellectually right up there with THE DAY THE EARTH STOOD STILL and presenting in some ways many of the inter-racial and socially irresponsible foibles that human-kind finds so entrenched. Made at a time of the escalating Cold War, the film unashamedly picks its sides but hey, its an American production!

I saw the film on its initial release when I was just 12, I could hardly then lay claim to knowledge of all things political, but I KNEW a good film when I saw one. In the viewings since (and it is shown way too infrequently on cable) I have come to admire its message and inherent brilliance.

An alien civilisation whose planet is pretty much the next dead thing (WAR OF THE WORLDS, THIS ISLAND EARTH, etc) looks to speed up destruction of the human condition by giving a representative of each of the five super-powers the ability to eradicate life in totality. For the purpose, an alien drops in with a few vials of ‘wipe-out’ and hands them out to the chosen five before retiring to the referee’s corner to watch the game.

Gene Barry, who played it so cool in WAR OF THE WORLDS is the US agent with the chiselled chin and all the right accreditation. The supporting cast are all good and with hands-on direction, about the only thing to let it down are the micro-cosmic budget-restrictions. It remains though a classic film of the genre and is deserving of a much higher profile than that it currently enjoys. Probably due for a remake about this time.