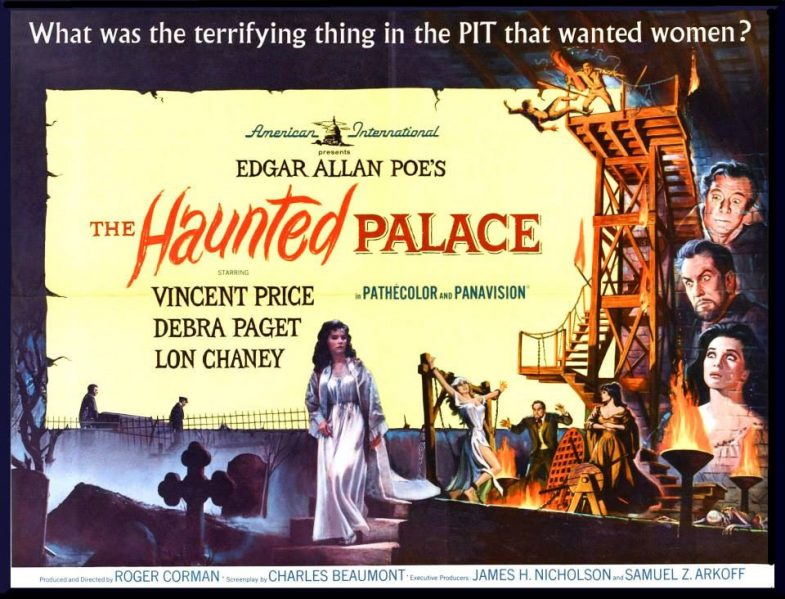 The darkest of Roger Corman’s Poe chillers, though this yarn owes more to HP Lovecraft than Edgar Allan’s poetry. Vincent Price gives his all time greatest performance in a dual role as possessed and possessor, aided by a wonderfully literate script by Charles Beaumont. It gives Price no leeway to indulge his tendency to sometimes ham it up.

Here, he keeps tight dramatic restraint on himself, making his gradual transformation from kindly innocent to the reincarnation of his warlock ancestor a virtuoso portrayal of inner turmoil overwhelmed by fiendish evil. Corman even provides a last good role for Lon Chaney Jr (as he’d done previously for Boris Karloff, Peter Lorre and Basil Rathbone) as a ghoulish henchman.

Undeniably, ‘The Haunted Palace’ does have a rather ponderous pace and music score that makes the film seem stretched as Price wanders down just one more hidden corridor. Floyd Crosby’s widescreen cinematography is also unrelenting, capturing the drab, muted blue and brown pastels of a Puritan village plagued by witchcraft. And the barely glimpsed green demon lurking inside the vault was perhaps a mistake.

But Corman’s skill on a 15-day schedule and a cheap budget is evident throughout. He introduces Chaney in a splendidly done sudden shock appearance that will still make unwary audiences jump (asked why he is preparing a room in the dark, he tells Price, “One becomes accustomed to the darkness… here”).

True Corman fans will rank this chilling piece of American Gothic among his best. Not least where an exasperated Chaney asks the possessed Price when he will be satisfied avenging himself on the descendants of those who burned him at the stake. “Not until this village is a graveyard,” Price promises Chaney sibilantly. “Not until they too have felt the kiss of fire on their soft flesh… all of them.”