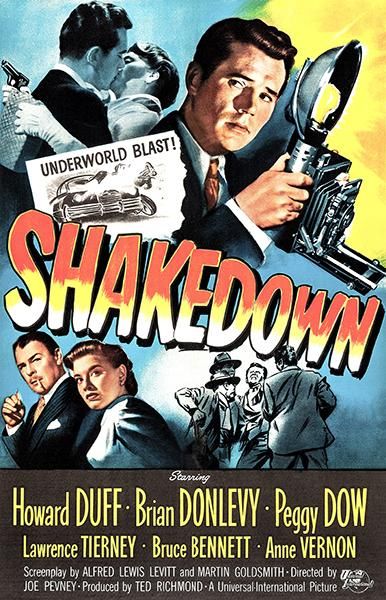 In Shakedown, Howard Duff plays his specialty, a winsome crumb. As a down-at-the-heels shutterbug desperate for a job, he sells lurid pictures — drownings, defenestrations — without any thought to the peril his subjects face. Once he lands the job by buttering up his editor’s assistant (Peggy Dow), he realizes that compromising photos of crime figures pay better as blackmail than as journalism. He doesn’t scruple to double-cross his prey if the profits can underwrite his taste for the high life, including the widow of a mobster he set up for a hit. When he just happens to be on hand to snap that murder, he causes a sensation but raises suspicions. Of course, his duplicity and greed prove his undoing…. With such familiar tough guys as Brian Donleavy and Lawrence Tierney, the movie clicks right along apace with Duff’s camera. A nice irony shades the ending, not unlike the denouement of Taxi Driver: the heel gets turned into something like a hero.