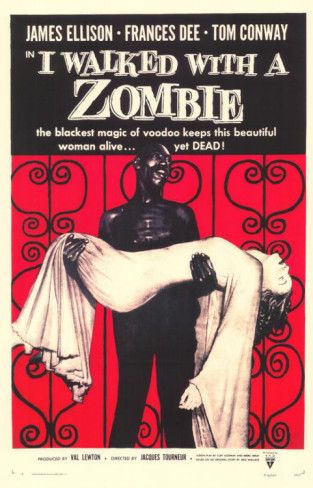 First of all: PLEASE don’t let the misleading, rather silly sounding title discourage you! I walked with a Zombie is another brilliant result of the collaborations between producer Val Lewton and director Jacques Tourneur. Released one year after the simply astonishing movie ‘Cat People’, this is yet another intelligently elaborated and genuinely original genre-masterpiece. The solid screenplay contains a rarely seen before amount of eeriness and handles about a young ambitious nurse who goes to San Antonio in order to take care of Jessica. Jessica is the wife of plantation-owner Paul Holland and she suffers from a bizarre mental paralysis, supposedly caused by a tropical fever. She is – in fact – a zombie only not the type of walking corpse you usually expect in horror movies. Betsy, the nurse, is somehow convinced that Jessica may still be cured and turns to the Voodoo-community that is living on the island as well. Just like he pulled it off in Cat People, Tourneur manages to bring suspense in a subtle way. Without bloody images but with a unique photography and efficient set pieces! I walked with a Zombie contains great dialogs, intriguing characters and mind bending plot-twists. This is an intelligent and demanding film, especially made for people who take this genre serious! It ranks slightly under ‘Cat People’ but light-years above most other horror films. Check it out!