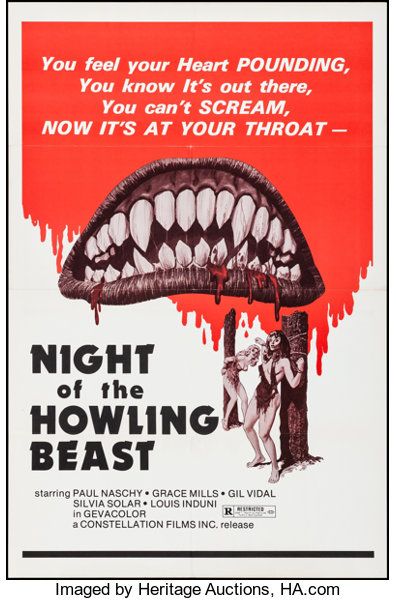 In this Spanish horror movie a group of scientists travel to Tibet to try and track down the Yeti. While there one of their team is infected with lycanthropy and periodically turns into a werewolf.

This is my first exposure to the Spanish horror icon Paul Naschy, who stars in the lead role here. Seemingly Naschy made many similar films in a long career. On this basis, his back catalogue could do with further investigation. Despite being a low budget affair, The Werewolf and the Yeti throws a lot of ideas at us and certainly tries to entertain. Aside from the two title monsters there are a pair of cannibal vampire cave-girls, a wicked sorceress and a gang of violent bandits. Sadly, while the werewolf has a prominent part to play in proceedings as he goes round killing bad guys, the Yeti only appears at the beginning and the end. The snowy locations and sets are very nice too and add to the overall atmosphere.

This film’s main claim to fame has to be its inclusion on the Video Nasty list. It was even one of the titles that remained on the DPP’s hit-list right until the very end and so has an added notoriety. However, it really is quite difficult to work out why this should be, as despite some gory moments this is hardly a shocking film. The skinning sequence is probably the most obviously infamous but it’s not particularly graphic. Rather than being nasty, this is more of a silly and schlocky film. It should interest werewolf film fanatics and should also offer something to those who enjoy the racier Euro variants on the Hammer horrors.