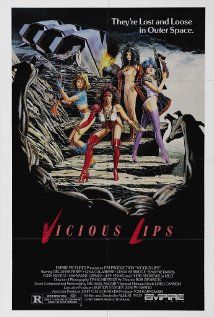 This is essentially a rock ‘n’ roll fable set in a sci-fi environment, as the title band vies for fame and fortune. A gig on a distant planet could be their ticket to the big time, but first they have to get there. Next, they have to learn to start getting along. Judy (Dru-Anne Perry) is brought in to replace the original singer, and Judy has to struggle to be accepted. The balance of director Albert Pyuns’ script deals with the girls’ being marooned on a desert planet after a near accident in space.

The problem for this viewer was that there really wasn’t a strong enough story, or characterization, to latch onto and draw him into the movie. The movie is a curio, to be sure, but for too much of the running time, things are rather dull. Most of the gals in the band are interchangeable, although they are indeed a good looking bunch (gotta love that huge 80s hair!). Perry does her best to create a somewhat engaging character. The best value in “Vicious Lips” comes from the look of the movie, with appropriately trashy and colourful production and costume design. The songs are certainly catchy. There are some fun makeup effects courtesy of Greg Cannom, and John Carl Buechler and his team, and one major creature role, “Milo”, played by Christian Andrews. Milo creeps on board the ladies’ spaceship and sneaks around, but it takes too long for him to actually interact with any of them. The names of these people are fun; lovely Pyun regular Linda Kerridge (“Fade to Black”) plays a band member named “Wynzi Krodo”. Mary- Anne Graves seems to be having a good time as rock promoter Maxine Mortogo, but Anthony Kentz is simply annoying as Vicious Lips manager Matty Asher.

A late-in-the-game plot twist is groan inducing, but the resolution creates some good vibes as Vicious Lips rock the joint with a ditty dubbed “Lunar Madness”.