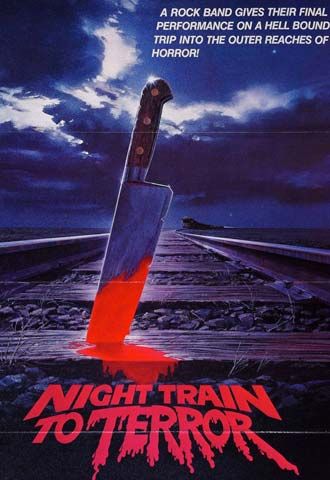 God and Satan are on board a train where a rock band is playing. The two talk about who is respected more and then we see three separate stories. The first story deals with a man who feels guilty over a drunk driving death that he caused. He finds himself involved in a strange experiment. The second story deals with a medical student who falls in love with a beautiful woman and gets drawn into a strange world of monsters. The final story has a detective (Cameron Mitchell) investigating a murder that leads to a Satanic playboy with special powers.

NIGHT TRAIN TO TERROR is a really, really bizarre little movie with an even more bizarre behind-the-scenes story. The only new footage here are the scenes dealing with the rock band and God and Satan. Everything else is footage taken from three completely different movies. What’s so strange is that all three of those movies are available to view in their complete form so it’s kind of pointless watching them chopped up to fit 20-30 minute segments.

The biggest problem with this movie is that all three stories are completely confusing and they never make too much sense. THere are so many logical issues with each of the three stories and it’s easy to see why because all of them are missing over a hours worth of footage. To say that this film was a complete hack job would be fair and it’s also fair to say that the studio was just trying to make some cash out of the previous films that I’m guessing they already owed. Why not cut them down, add a wrap-around story and try to pass it off as something new?

As it stands, this is a pretty hard film to judge simply because of the editing process. The end result is quite poor and it’s hard to be entertained by NIGHT TRAIN TO TERROR simply because the stories are so bad as they are presented here. To really judge them you’d need to see the complete films. As it stands, NIGHT TRAIN TO TERROR is pretty bad but the backstory is much more interesting.