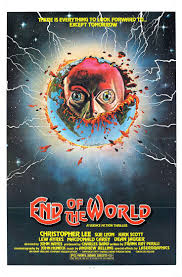 “A scientist discovers signals from space that appear to carry information concerning a series of seemingly unrelated natural disasters, occurring across the globe. Hoping to discover the source of these signals and who’s behind them, the scientist and his wife set out on a trek to locate the intended recipient of the signals. What the couple eventually discovers is a small remote convent with occupants who are not really who they appear to be,” according to the DVD sleeve’s synopsis.

Kirk Scott (as Andrew Boran) is the scientist who intercepts alien messages on his computer. He suspects a series of “Large Earth Disruptions” may be connected to the weird space static. Mr. Scott and pretty blonde wife Sue Lyon (as Sylvia Boran) investigate the mysterious signals from outer space. They discover priestly, but creepy Christopher Lee (as “Father Pergado”), and other silliness. Given that, “End of the World” is remarkably dull.