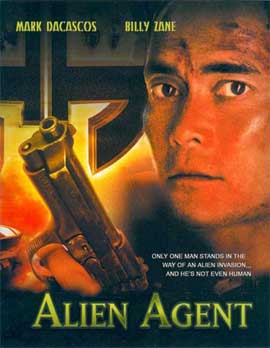 Defying the decree, a rebel faction on the alien home planet attempt to invade earth. They send in scouts (via some kind of heavenly projectiles) who have the ability to reanimate human bodies with their life force (once the human has died of course) thus taking over their humanly appearance and conveniently making all the aliens appear as humans for the duration of the movie.

These aliens are stronger than humans and have other neat abilities, like regeneration and psychic awareness, their aim is to build a portal to their own world, enabling them to send in their armies and take over the earth – presumably sending everyone by meteorite is too difficult.

All is not lost! Some good guys get wind of the evil factions plans and send their best agent, the ‘lone ranger’ named Ryker (Mark Dacascos) to stop them.

All in all the movie is fairly enjoyable. There are a few inconsistencies, but for the most part its fairly well put together. There are plenty of fight scenes, most of them being fun to watch even if slightly predictable. The one notable exception being marred by poor speed editing – director please note: Mark Dacascos is fast enough! Marc Dacascas plays the lone crusader well and his unlikely sidekick Emma Lahana (Julie) did almost too good a job at times, switching demeanors so fast it was hard to keep up.

Its lack of big CGI animations and special effects works in its favor for the most part, the movie seems better for it. In fact some of the worse parts in the movie are when the utterly unconvincing CGI effects are used to heal Ryker (don’t worry – there aren’t many), I can’t help but think it would have been better left to the viewers imagination.