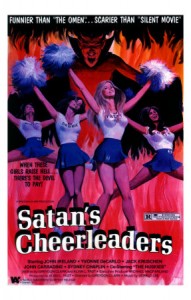 GREYDON CLARK is a renaissance man of B movie cinema – actor/writer/producer & more over four decades of delectable decadence (and counting). Here is a brief but illuminating Q&A with this genre giant:

Will the Thrill: Any standout memory or lasting impression of working with Al Adamson?

GC: I was a struggling young actor when I first met Al Adamson. He was the first director I ever came into contact with. We met through a mutual friend. I became his assistant (a glorified gofer) on a film that eventually became Hell’s Bloody Devils. After that film, Al mentioned he had a treatment on a western he wanted to make. I volunteered to write the screenplay. When I told him I’d do it for no fee he said to go ahead and give it a try. I’d only read one script and had no idea where to begin. Somehow, a few months later we were sitting in Robert Taylor’s Malibu mansion offering him the lead role. He agreed and ABC television gave us the go ahead for one of the first made for TV movies. I’d written a good role for myself and felt I was on my way. Robert Taylor suddenly died and the project was shelved. Al raised $50,000 for a low budget movie, but had no idea what to make.  I again volunteered to write something that could be done on that budget and came up with the idea and screenplay for Satan’s Sadists. We made the picture near Palm Springs, CA in the fall of 1968. It was a wonderful experience for me. Al was not the most prepared director to ever stand next to a camera, but he was open to ideas and I constantly pestered him and the rest of the cast with “suggestions” – some taken… most not. That was really the first film I worked on from conception to completion. I sat with Gary Graver who was editing and learned a great deal from him. Within a year I was directing my own. I’ve been very lucky throughout my career and I owe a great deal to Al Adamson and all those who allowed me to peer over their shoulder and learn from them. 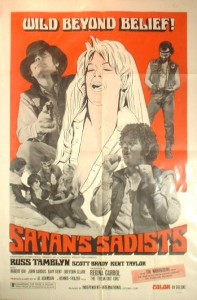 Thrill: Favorite of your films as director?

GC: Impossible to choose. If you pushed me… I’d say, “The next one.”

Thrill: Favorite of your films as actor?

I’d had some success with Black Shampoo. I’ve always defined a picture as successful if it made enough money to allow me to keep making pictures. I didn’t want to make another Blaxsploitation film.  At the time cheerleader films were doing well and The Exorcist was a huge hit. I thought about combining the two. I’ve always like comedies and no matter what the film I’d add as much humor as possible. I came up with the title, Satan’s Cheerleaders – now that’s a comedy I could get excited about. Al Fast and I wrote the screenplay and plowed forward with the production.  I realized that I’d end up with less than experienced actors for the cheerleaders and wanted the others to be as experienced as possible.  I’d directed Aldo Ray and Jock Mahoney in The Bad Bunch and they were great to work with. I was able to put together a group of name actor’s to support the younger cheerleaders. Jacqeuline Cole – we met on Satan’s Sadists and stayed together for 35 years – was available for the cheerleader’s teacher and production began.  The budget on all my films was always a problem and the shooting schedule became a major obstacle. We had two weeks to make the film. 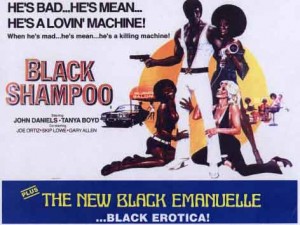 GC: What got you interested in this business, and why “grindhouse/drive-in” cinema? Are you a fan of this genre, or was it just the most expedient career path?

I came from a small town in the Michigan and didn’t know anyone west of the Mississippi. I wanted to be a film actor and, after dropping out of college, headed to Los Angeles. It was two full years of selling crap door to door to pay the rent before I met Al Adamson. He was trying to make main stream films, but having little luck. When we made Satan’s Sadists and it became a huge “grindhouse” hit I think the dye was cast for both of us. In those days if a producer could somehow come up with a few bucks and make his movie,  he could get it played in theatres. These theatres were not the main stream type, but drive-in and grindhouse theatres that would play exploitation films. The major studios were not making these types of films (they are today). This left a market for the independent film maker. If you had a good title, good ads, and the picture delivered you could play the drive-in – grindhouse circuit and get your money back and show a decent profit. If the picture really hit – like Satan’s Sadists you could make a career. That’s what happened to Al Adamson. I was lucky enough to have a long career directing many genres – some better than others, but I’m proud of them all.

Thrill: What are you working on now?

GC: I’m putting together a remake of Without Warning. 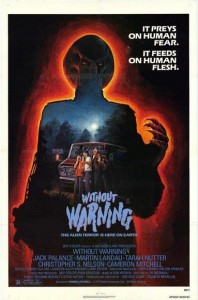