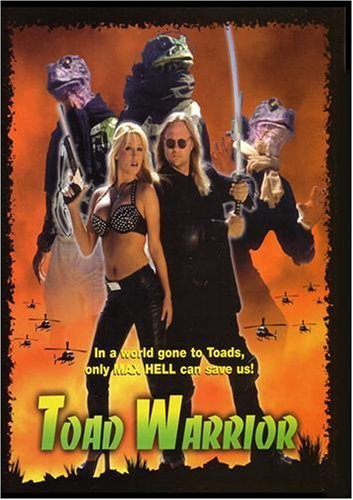 “Toad Warrior” is a mixture between “Hell comes to Frogtown” and “The Roller Blade Seven” without the charm of the original “Frogtown” movie. Joe Estevez as Mr. Big Micky O Malley gives this one a fine comedy touch, legendary Conrad Brooks appears again as the Swamp Farmer (like he did in “Rollergator” and he is talking here with his baby alligator, too).

It’s not a bad movie but it is nerving to see the same scenes repeating again and again. The budget wasn’t very high so you see people wearing frog masks but the rest of their body especially the hands are human.

Scott Shaw looks like he came from the set of “RB 7” without having the time to change his clothes. He plays Max Hell, who is surrounded by a lot of pretty girls (“I know you, you have your own homepage”). He plays the hero tough with a fine comedy style.

It’s a very strange and bizarre action-comedy with Donald G. Jacksons impressive visual style which makes him different from other Filmmakers. Watch it and enjoy it!

0 47
Roots Of The HeadHunter

0 46
Four Flies on Grey Velvet: A Review By Abigail Braunsdorf