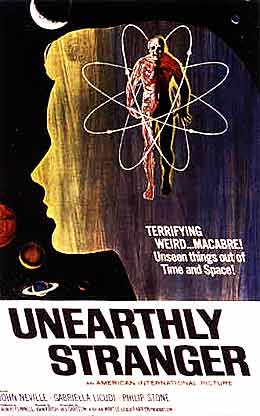 There are a handful of fine films that have never been released on tape or disk. Sometimes they show up on the few independent TV stations around the country that still have access to the old collections of movies that used to circulate in the days before cable. Nearly lost films, except in the memories of people who saw them at drive-ins or on TV before the current age of homogenous viewing. Unearthly Stranger is a perfect example of this kind of film. Not the masterpiece that Invasion of the Body Snatchers is, Unearthly Stranger is still a wonderful science fiction story with trappings of the paranoia that characterizes Body Snatchers, I Married a Monster, and other, earlier, SF films. Stranger was a throwback when it was new, and that may be why it was pretty much ignored when it was released. With DVD releases of an awful lot of true garbage, there really is no excuse for the continued neglect of this stylish, almost lost movie.