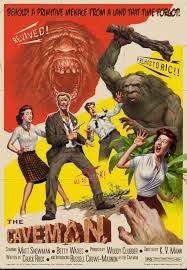 Cranky scientist experimenting on transforming animals and people into their prehistoric selves (sorta), tries it out on himself and becomes a Mr. Hyde-type Neanderthal. Robert Shayne (Inspector Henderson from The Adventures of Superman) plays the would-be Jekyll and he’s great fun. His character gets upset with everyone and insults them at the slightest provocation. He’s a real bitch and I love it! The rest of the cast is solid, with some interesting character actors like Robert Long and Dick Rich helping to keep things moving. The script doesn’t give them a lot to work with but they bring their lines to life with conviction. Richard Crane is a bit annoying as the stiff protagonist and just about every woman in the movie is insufferable, save for the great Beverly Garland in a minor role. Working with an obviously limited budget, director E.A. Dupont and cinematographer Stanley Cortez craft a pretty polished-looking B picture. Of course only so much can be done special effects-wise on a small budget but there is some nice camera-work and a decent level of atmosphere in some of the night scenes. Better than some of the other reviewers are giving it credit for but nowhere near a classic. Worth a look for fans of ’50s B horror and sci-fi.