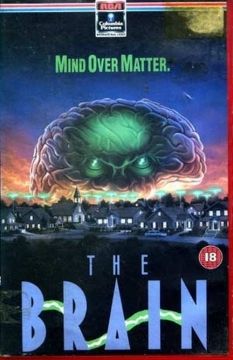 This is a nice little b-movie from the glorious 80’s that really made me laugh. The thing i enjoyed the most of course would be the awesomely slimy low budget special effects! Those, although cheap, were often really killer! The movie’s about a mad doctor who brainwashes people subliminally through his television show into being what he calls “Independent Thinkers” which are really helpless pawns in his nutty plot to take take over the planet via mind control. (They should have included that Suicidal Tendencies’ song “Subliminal” in the soundtrack, oh well) Anyway somewhere tied into this cool plot is a giant slimy killer brain from outer space. Sounds cool huh? Well it is so check it out if you dig cheesy creature fx from the 80’s. There’s also a couple scenes with boobies which is always a plus. The funniest part is a certain attack where the brain looks like a giant scrotum devouring a human being…if that don’t sound rad to you then don’t waste your time with this or any of my other reviews cuz we definitely got different taste but otherwise this isn’t to be missed!