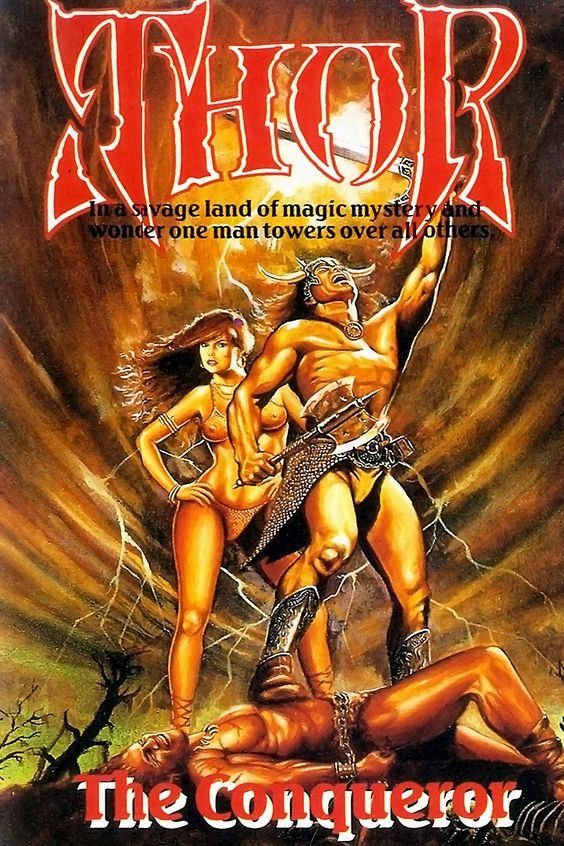 Now I know that general opinion holds this film in utter disdain and yes, I will concede that it is certainly no cinematic masterpiece, but…….there is a certain strange fascination that it exudes in it’s primitiveness.

This is REALLY low budget movie making in effect.

The story details the protagonist’s adventures in a land filled with various perils such as demons and evil tribes etc. There is also an underlying story of revenge as Thor’s fate leads him to battle and eventually slay the barbarian who murdered his father when he was a baby.

Whilst the plot itself is incredibly basic, (if it even merits as a plot at all) the way it unfolds on screen is bizarrely compelling.

I really can’t put my finger on exactly why I rather enjoyed such a universally reviled movie. As said above perhaps the sheer baseness of the picture was the attraction to me. Certainly the closest movie I could liken it to was Lucio Fulci’s similarly themed ‘Conquest’, again a film which is generally loathed by most people (even fans of the Sword & Sorcery genre to which it belongs) but again, a film which I found to be strangely intriguing.

Overall then, if your a fan of Sword & Sorcery flicks then you might want to give Thor The Conqueror a try – just don’t expect anything along the quality lines of Conan The Barbarian.