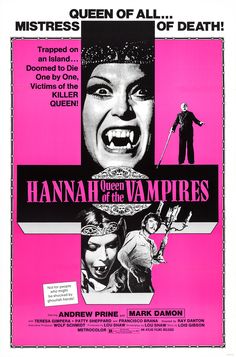 Atmospheric, eerie little Spanish thriller starring Andrew Prine as a man who travels to a remote island off Turkey after his archaeologist father dies in an apparent accident after discovering an ancient tomb. Writer (Damon) and his sister (Shepard) who have also recently inhabited the island try to facilitate Prine’s attempts to raise the heavy sarcophagus that covers his father’s remains to affect a proper burial. But the locals are reluctant to assist, fearing that the crypt’s occupant – Hannah (Gimpera) – will be resurrected to raise hell on the island.

Surprisingly effective, though it appears to be un-liked judging from other reviews, I found the English translation conversion by Ray Danton to be a genuinely scary and compelling tale beautifully shot in black & white, with a talented cast. Prine has the right pitch as the polite outsider who can’t be convinced that his actions will awaken a dormant vampire, his attentions straying to the plight of Shepard, concerned for the welfare of her brother. Both the exotic Shepard and durable Damon are assured in their roles, enhancing the production and its overall quality. For her part, Gimpera as Hannah is a beguiling beauty, even if only appearing prominently toward the end of the picture and without any intelligible dialogue. Film buffs should also applaud Danton’s assembly of B-movie talent – Edward Walsh and John Alderman in minor roles (Walsh has a great scene after an encounter with Hannah), while prolific Spanish actor Frank Brana has a key supporting role as the blind foreteller of doom.

The lighting and sound is exceptionally refined and the film overall is stylish; the beach and cliff-top scenery bathed in black & white is visually stunning, though admittedly some of the night scenes are obscure in the darkness. I read that Danton shot additional English-language footage which was conjoined with Julio Salvador’s Spanish version; with no visible seams, it’s a rare example of where footage grafts actually enhance the overall result. Builds the suspense gradually (potentially irksome for viewers with a need for constant gratification), the rousing finale is a tense encounter that elevates the pulse, while a curtain-dropping post script is a satisfying epitaph. Worth the effort.

0 47
Sneak Peek Of ‘Sharknado 2: The Second’ One Released

0 42
The Dank Abyss of Social Media and The Movies