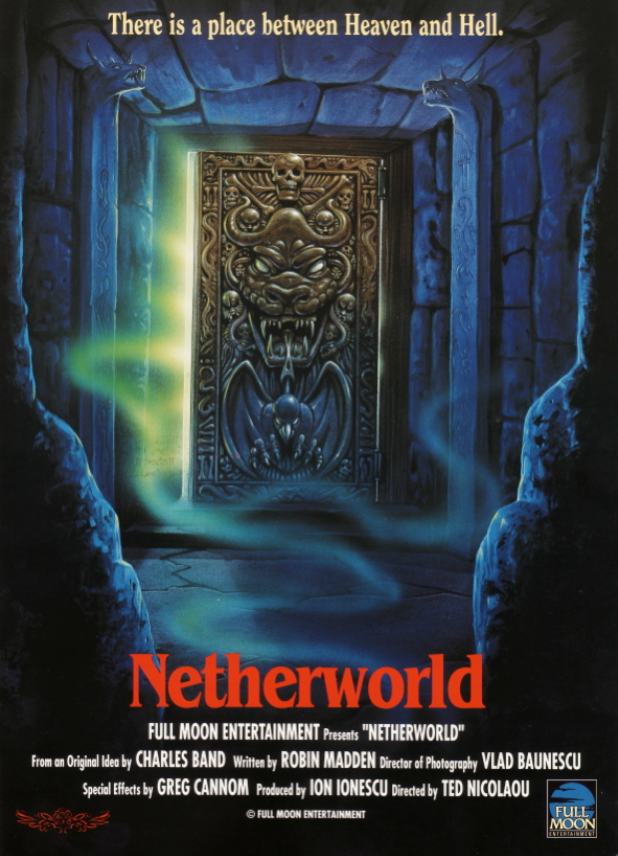 NETHERWORLD, a Full Moon picture set in the Louisiana swamps, successfully delivers a Gothic atmosphere filled with lush vegetation, isolated manor homes, and brothels operated by voodoo sorceresses. However, thanks to a hopelessly cheesy script, the film never transcends its early-90s low-budget roots.

The plot concerns a Corey Thornton, a dashing young man who has just inherited a vast estate from the father he never knew in life. While combing through the deceased’s papers, he discovers that his father’s last wish was to be brought back from the dead. Corey becomes obsessed with this task and seeks help from those around him: Bijou (the slobbering neighborhood idiot-savant), Diane (Southern-fried “jailbait” who actually looks to be about 25 years old), his father’s lawyer (who has mysteriously deformed hands), and of course Delores (a prostitute with big hair and mystical powers).

The action alternates between Corey’s manor house and Tonk’s, the brothel-next-door, where all the girls are named after dead celebrities…or have Marilyn Monroe and Mary Magdalene really been resurrected?! The band plays smooth jazz as passions rise and Delores casts sultry glances at everyone. Then things get weird. A hand flies out of the wall and starts killing people, whose souls become trapped inside the bodies of birds. A bird which is clearly a hand puppet screams “NEVERRRRRR!” We finally descend to the Netherworld, where the forces of evil fight for control of Corey’s mind in a scene that will leave you wondering, “Oh…that was the climax?” All in all, Netherworld is a good bit of entertainment which never gets boring; however, one can’t shake the feeling that if slightly more money and effort had been put into it, it could have been good instead of just adequate.