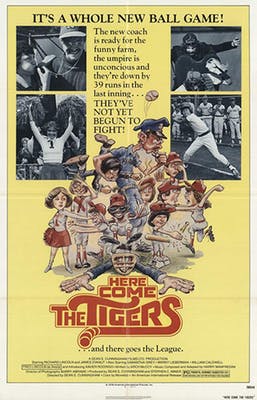 Have not watched kids films for some years, so I missed “Here Come the Tigers” when it first came out. (Never even saw “Bad News Bears” even though in the ’70s I worked for the guys who arranged financing for that movie, “Warriors,” “Man Who Would Be King,” and “Rocky Horror Picture Show,” among others.) Now I like to check out old or small movies and find people who have gone on to great careers despite being in a less than great movie early on. Just minutes into this movie I could take no more and jumped to the end credits to see if there was a young actor in this movie who had gone on to bigger and better things–at least watching for his/her appearance would create some interest as the plot and acting weren’t doing the job. Lo and behold, I spied Wes Craven’s name in the credits as an electrical gaffer. He’d already made two or three of his early shockers but had not yet created Freddie Krueger or made the “Scream” movies. Maybe he owed a favor and helped out on this pic. More surprising was Fred J. Lincoln in the cast credits as “Aesop,” a wacky character in the movie. F.J. Lincoln, from the ’70s to just a few years ago, appeared in and produced adult films. He was associated with the adult spoof “The Ozporns,” and just that title is funnier than all of “Tigers” attempts at humor combined. Let the fact that an adult actor was placed in a kids movie be an indication as to how the people making this movie must have been asleep at the wheel.