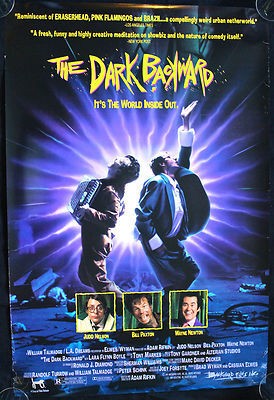 There’s never been anything quite like it on-screen. In form, it’s a Fairy Tale of the very Grimm variety. In tone, it’s closest to the absurdist theatre works of Beckett, Pirandello and Ionesco. There’s also a whole lot of allegory and symbolism going on here. Though everything is told simply there’s a tremendous amount of depth to ponder in the issues the film raises and in the way the characters deal with living in this metaphor for Hell. Understanding the universe they are inhabiting is the key to appreciating this film.

The “Dark Backward” explores a world that is overwhelmed with scum and filth. One of the characters, Gus, is so dirty he looks like a live action version of “Pigpen”.

As this character Bill Paxton gives one of the bravest, most fascinating performances I’ve ever seen. He walks a tightwire of contradictions playing a character who is at once both innocence and evil incarnate.

He’s loud, lustful and obnoxious. He’s quiet, virginal and caring. At one moment, he’s as stupid as a post; in the next, he’s cunningly manipulitive and deceitful. To oversimplify-it’s like being asked to play Forrest Gump AND Iago in the same character. Miraculously, Paxton not only pulls it off but makes it appear as though all these opposing traits could easily belong to a single creature.

The rest of the cast is magnificent in the way they embrace the excesses of their respective characters. As mentioned earlier, this is an absurdist story and these actors realize the importance of exaggeration to make the genre work. This is also why those who have dismissed Paxton’s work as over-the-top should not be heeded. This is a film that shows a world where there is no top to be gone over. There is nothing which can be considered too much.

0 44
Donna Douglas, aka Elly May Clampett, passes away at age 81