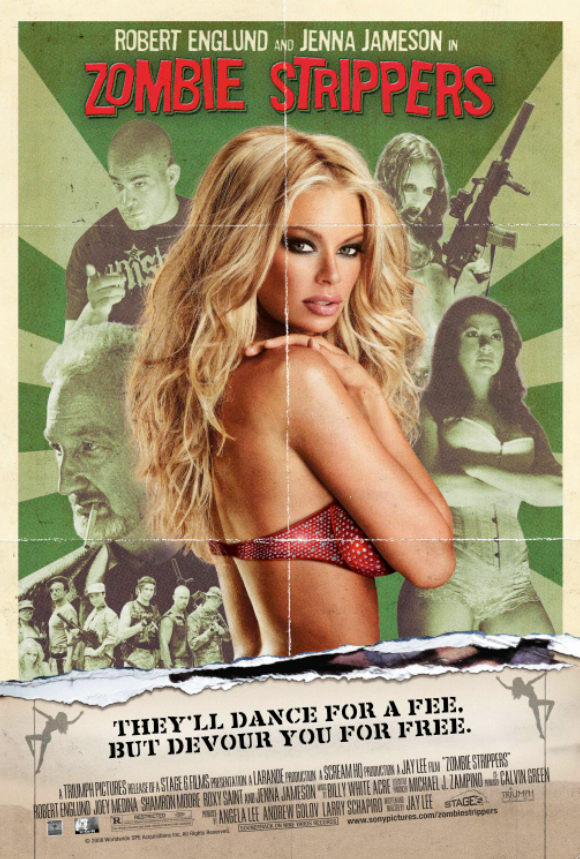 The ability of the 20th century’s major Continental philosophies to adapt to the 3rd millennium is examined through the competing Weltanschauung of a cadre of sharply divided strippers in the American Midwest.

The characters are forced to define and own their ontology when a government manufactured zombie virus is unleashed. Yes, it may be possible to continue stripping after coming back from messy death, but is there more to life?

Ultimately, both the Nietzschean Ubermensch and Satre’s existential despair are shown to be inadequate responses to the human condition, as well as to the zombie condition. In fact, a greater level of alienation then has been previously imagined is shown to be possible when a being is left severed from humanity while still sentient.

The failing Gestalt of excessively broad Panglossian optimism is laid bare, along with the entire cast. Rather than presenting a justification for self-annihilating submission to a mob which demands conformity as payment for acceptance, the protagonists must embrace individualism both qua the only reasonable way to survive and qua the innate demand of humanity.

Sacrificing the enduring emotional vitality and undeniable free will of a human life span for the illusion of release to be found in reanimation leads only to unrecoverable angst for those strippers who submit to the zombie virus.

This piece is properly read as a modern re-assessment of the lessons the Enlightenment. While a cynical view of religion’s ability to define the scope and meaning of life is buttressed, we all – even a zombie in her actual death throws – must account for our choices. Infinite rebirths are not an option.

Meanwhile, fresh philosophical challenges are brought to bear in the characters of an aging Russian lap dancer and her harsh pragmatism and Paco, the illegal janitor who draws on his own cultural traditions to script a deeply personal reaction to the zombification of his co- workers.

Numerous definitions of humanity are tested: rationalism, logic, empathy – but it ultimately our ability to choose life and to find beauty in the sheer act of being alive that separates the living from the merely undead. The audience is asked to reconcile being human and being alive, having first debated if there is is a foundational schism at all.

More deep is the question hinted at and left unanswered by the film: if science, in the form of a toupe wearing lab tech who unleashes a chemo- virus that reanimates dead flesh, unleashes evil; and if the humanities, in the form of remarkably fresh looking strippers who toss off gems of epistemological wisdom between turns on the stage, are left to address the terrible question of whether to choose zombification for greater tips, where is the solution?