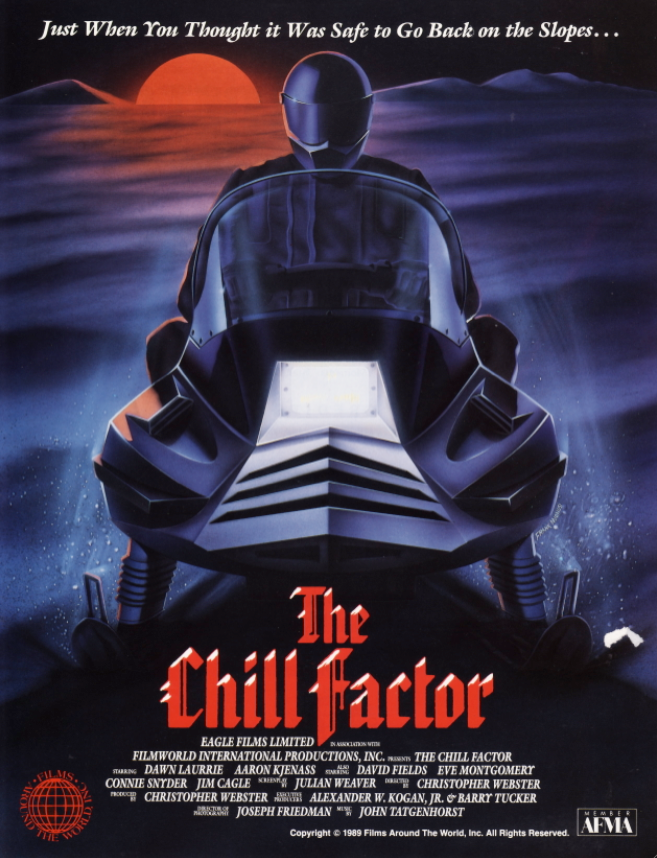 “The Chill Factor” follows a group of snowmobilers stranded at an abandoned religious camp where they uncover a strange ouija-like game, and proceed to unleash demonic spirits that start taking hold of them one-by-one.

This utter oddity was filmed in the late-1980s but went unreleased until several years later when it surfaced on video under the title “Demon Possessed.” Make no bones about it, this is a low-budget flick, and has all the hallmarks of a cheap horror flick: Bad acting (especially from the extras), silly gore effects, and a plot that seems to have been invented on the fly (a voice-over narration from an apparently chain-smoking grandmother attempts to tie up the loose ends). Even with its pitfalls, however, I found myself enjoying “The Chill Factor” for what it is.

The film’s greatest strength is that it’s quite atmospheric, and recalls other snow-set horror films such as “Curtains” or “Ghostkeeper,” which feel like distant cousins. Conceptually, the plot has potential, and is just weird enough to be attention-grabbing; the execution, however, is not quite up to speed, but one can see the seeds of something ominous buried underneath all the ineptitude. I won’t attempt to make a case for “The Chill Factor” being a good film, because it isn’t, but it is so bizarre and so wonky that one cannot help but get somewhat absorbed in it. There are a handful of decent death sequences, and the finale boasts a snowmobiling showdown that is ridiculous but somehow not out of place.

“The Chill Factor” is worth a watch for horror purists who enjoy cheapjack possession horror flicks; it melds the demon film with the slasher, and packages it in a late-’80s aesthetic that is as perplexing as it is amusing in all its weirdness