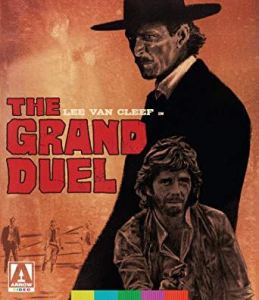 The post above that states that this film was shot in English is only partially correct. Each of the characters spoke their own language, and the script was available in quite a few. How do I know — I am the deputy who goes up to the stagecoach and gets used as Lee van Cleef’s coat rack. Lee and Jess did speak English, but the people in the stagecoach spoke mostly Italian. The bounty hunters spoke a multitude of languages, one even spoke Serbo Croatian. Do not know about the speaking any of the cast after the stage left Gila Bend, that was the only part I saw. I was a young Army Officer in Italy and had the opportunity (along with one of my NCOs — Bill on the rack with the Gila Bend sign) to play the role of the deputies in the beginning of the film. It was an opportunity I will always remember. Lee was a true gentleman, Jess was a hoot, and Lee’s stuntman/double, X Brand (Pahoo in the Series Yancy Derringer) was an extremely nice person. I will always remember being in this great film

0 135
A Few Moments With Kelli Maroney