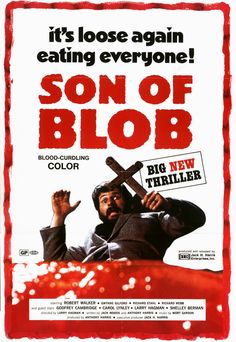 Yes, this is a horror spoof and a seventies horror spoof at that. It is loaded with some big(okay, fairly big Hollywood names like Cindy Williams, Burgess Meredith, Carol Lynley, Larry Hagman, and others) in cameos and somewhat meatier roles. It has a feel that is directly not going for screams but laughter, but all I could muster and muffle were yawns. Director Larry Hagman chose wisely to essentially give up directing and act. There are scenes that are so dark you barely can see Burgess Meredith in his short cameo(and I might add one of the highlights of the film for me). Other scenes are even darker. The music seems to have no relationship to what is going on screen most of the time. The acting, despite having a young Gwynne Gilford and Robert Walker as leads, seems wooden and forced – particularly from Walker as well as some of the cameos. A few of the actors eat and chew their scenes with vigor: Dick Van Patten as a scout master, Godfrey Cambridge as the man who is responsible for the Blob(the monster ravaging the town in the script rather than the man responsible for this blob of a mess), Shelley Berman in a weird scene as a barber, and character actor Richard Stahl really biting off a large piece of scenery as a bowling alley owner. Stahl is the best thing in this film. The story is ludicrous as we go from one in-transitioned scene into another. Look, I know it is for fun, but a movie like this can be fun to watch too. This one certainly wasn’t that for me.