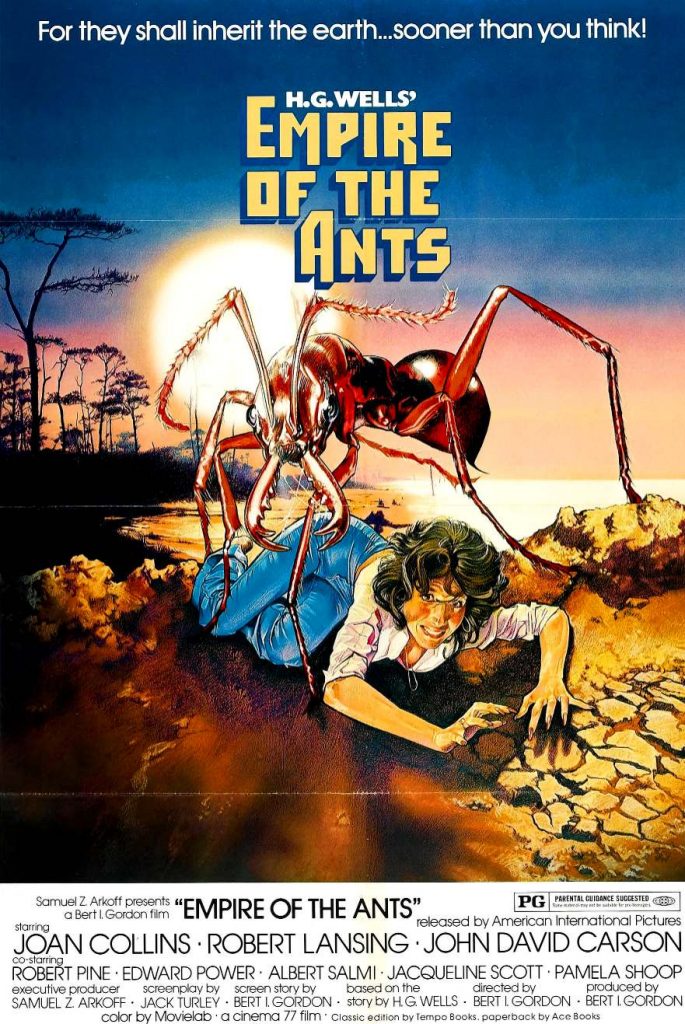 Joan Collins plays a real estate con woman who takes a group of people to the future sight of a “great” beach front property. What they don’t know is that a company has been pouring toxic waste in the ocean and unfortunately for them one barrel has found its way on shore and cute little ants have gotten into it. Soon these little creatures are now huge and eating humans. EMPIRE OF THE ANTS got the green light, I’m sure, because Gordon’s previous film THE FOOD OF THE GODS turned out to be a decent hit. You really could have called this thing THE FOOD OF THE GODS PART II because they’re quite similar but then again both are quite similar to the type of “big” movies Gordon was making in the previous two decades. There’s certainly nothing new or original here but if you enjoy Gordon’s films then I really see no reason why you won’t enjoy this one. As you’d expect, the special effects are quite laughable with Gordon using the same technique in 1977 that he was much earlier in his career. Often times it seems as if the ants are walking in thin air and at other times you can obviously see the rear projection. Most films would be dead in the water with such bad effects but I think it adds some charm because of how serious Gordon treats them. Most directors would know these effects are bad and try to downplay them or hide them but not Gordon. He shows these bad effects with his head held high and it at least gives the viewer some entertainment. Collins and the rest of the cast do what they can with the material they’re given but the humans certainly aren’t the high point of the film. I think the film would have benefited from being at least ten-minutes shorter as things really start to drag during the final act.