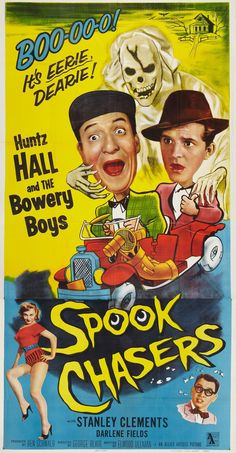 If you’re a fan of The Bowery Boys’ particular brand of madcap humour, then you’ll probably enjoy this one despite the fact that it a) closely follows the format of several of their other films, and b) it doesn’t feature chief Bowery Boy Leo Gorcey (although that’s not a big loss in my opinion). On the other hand, if like me you find their knockabout antics hugely irritating, then Spook Chasers isn’t going to change your opinion about the ‘boys’: it’s got the same lame jokes as before (Stanley Clements taking over Leo Gorcey’s malapropisms), the same dumb slapstick, the same corny villains, and Huntz Hall doing his same old gormless moron routine. I hated every stupid minute of it.

The stale plot sees cafe owner Mike Clancy (Percy Helton) being conned by realtors Harry Shelby (William Henry) and Dolly Owens (Darlene Fields) into buying dilapidated property Cedarcrest, previously a robber’s hideout. Together with Horace Debussy ‘Sach’ Jones and his pals, Mike drives to the old dump and starts to fix the place up. Hilarity ensues as Sach gets the plumbing and electrics mixed up and short-sighted Blinky (Eddie LeRoy) accidentally dips his paintbrush in someone else’s mug of coffee (yes folks, that’s comedy gold right there!). Eventually, Sach does a pratfall, lands on a tea trolley and crashes into a wall, causing a painting to fall and reveal a stash of cash.

Meanwhile, Shelby is approached by gangster Snap Sizzolo (Peter Mamakos), who wants to buy Cedarcrest, knowing that there is a fortune somewhere in the house. Clancy won’t sell, so Shelby and Owens decide to try and scare him and the boys into leaving, dressing up as ghosts. More hilarity ensues as the Bowery Boys are tricked into thinking the place is haunted, the shysters using a variety of hidden passageways, revolving bookcases and disappearing beds to achieve the effect (it’s amazing what hidden features you can find in a criminal’s hideout). Eventually, Snap and his men also turn up to use brute force, but are foiled by the boys and the timely arrival of the police.