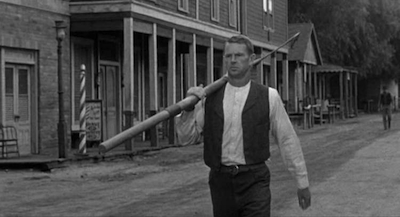 Over the weekend, the programmers at Northwest Chicago Film Society announced that they replaced Wednesday night’s 7:30 PM screening of The Halliday Brand with another western from director Joseph H. Lewis, Terror in a Texas Town. It’s one of the strangest examples of the genre, featuring a climactic scene in which Sterling Hayden brings a harpoon to a main-street showdown. The rest of the movie is pretty weird too: among the highlights are Hayden speaking with a Swedish accent and gloomy conversations about seafaring life that suggest the influence of Eugene O’Neill. (Come to think of it, this would make an interesting double feature with John Ford’s O’Neill adaptation The Long Voyage Home.)
In his original Reader capsule of the film, Dave Kehr described Lewis as “one of the great low-budget stylists,” citing the abstract qualities he brought to down-and-dirty genre assignments. But no less important to Lewis’s filmmaking is a realistic preservation of time and space. He probably executed more long takes than any other B-movie director of the 40s (his early quickie Secrets of a Co-Ed culminates with a ten-minute shot), and his deep-focus photography could be as imaginative as Orson Welles’s. Lewis’s work is always worth catching in theater: his technical stunts seem almost carnivalesque in that environment. Texas Town may not be as good an introduction to his work as Gun Crazy or The Big Combo, which are a little more controlled in their storytelling. But if you’re looking for something different, it might be the oddest thing playing in Chicago this week outside of the Underground Film Festival.