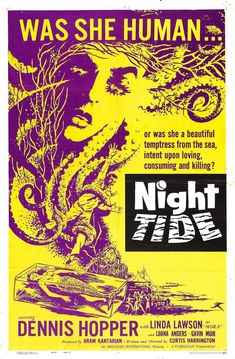 This film excels both as a good narrative (though it borrows heavily from “Cat People”), but also on a deeper, symbolic level. While Dennis Hopper had small roles before this, “Night Tide” casts him as a lead, and he fares well. Reviewer Rick McGrath says, “Hopper’s acting in Night Tide is, I think, ultimately suspect. It’s fun to see him so young, so cute in his tight navy suit, but he plays Johnny Drake as a bumbling, nervous, fidgety, slightly stupid loner … so much so he often seems dislocated from the action and his co-stars.” I don’t know that I agree. Surely he comes across as nervous and shy at times, but bumbling? Clearly his character was designed to be young and inexperienced — this is necessary for the scene in which he confronts Captain Murdock (Gavin Muir) in his home and is told tales of the Sirens and is shown a dismembered Arab hand. A hardened sailor wouldn’t be so spongelike for forbidden knowledge.

McGrath refers to this film as “a psychosexual tale of freudian camp and hilarity”. I think it’s deeper than that. Yes, there’s more sexuality than is presented on screen, but I don’t accept the absurd premises of McGrath, who goes so far as to say one scene involving a dock is “phallic”. No way. Is the film campy and hilarious? To a point, sure. It’s the early 1960s and the budget is low. But the writer and director, Curtis Harrington, seems to have a vision and executes it with finesse. The opening scene clues us in that Harrington is a man who cares about visuals, and we are reminded of this again alter on when we see Mora close up in the sideshow mermaid tank. He frames shots to reveal not just an object, but an emotion.

The casual viewer may overlook the literary and occult themes present in this short film, but I think the flower that is “Night Tide” cannot fully bloom without this understanding. As revealed in the closing credits, the film takes its name from a verse in Edgar Allan Poe’s “Annabel Lee”:

“And so, all the night-tide, I lie down by the side Of my darling – my darling – my life and my bride, In the sepulchre there by the sea, In her tomb by the sounding sea.”

The poem highlight’s Poe’s love of a woman so strong it stretches beyond death, and also happens to be the last complete poem he ever wrote, in essence his “last words”. The macabre nature of the poem underscores the hidden darkness of “Night Tide” that may not be apparent to all viewers.

Captain Murdock is a man with a rich sense of literature and philology. He is clearly familiar with Greek legends, as he relates the tale of the Sirens briefly to Drake. Presumably he is also the one who named Mora after finding her on a Greek island (assuming her origin is truthful). The name “Mora” is likely a variation of the Greek name “Moira”, one of the Fates of legend. Her name translates roughly to “fate”, “destiny” or “doom”, a fitting moniker for a woman who is the death of her lovers. Murdock also paraphrases a notable line from Shakespeare’s Hamlet:

“There are more things in heaven and earth, Horatio, Than are dreamt of in your philosophy.”

As an aside, it is worth noting that Harrington named his main character “Drake”, a male duck, which may be symbolic of Johnny’s being torn between land and sea, as ducks are comfortable equally with both. This is clear from his career as a Navy man who spends his time on the ocean, but seems more at home on the shore. And, of course, it parallels his love of Mora, the creature of the sea, with the relative safety of the land where she is unable to lure him to a watery grave.

Most viewers will miss the occult connection, as it is not made overtly clear in the film. The only sign we have to go off of is Murdock’s address in Venice, 777 Saabek Lane. “777” may be familiar to Biblical scholars as one of the numbers of perfection — 7, the number of God himself, combined with 3, the unity of the trinity. It is alluded by this address that Murdock is a man of knowledge and power, both mysterious and esoteric. But also, this is a number associated with Aleister Crowley, the famed English occultist. This is no mere coincidence, as Crowley has a connection to this film.

His connection comes through the woman who plays the “water witch” that speaks the odd language, Marjorie Elizabeth Cameron (1922-1995). Cameron was the wife of rocket scientist Jack Parsons, a friend of Alesiter Crowley who was hand-chosen to lead California’s Agape Lodge in 1942. Parsons, incidentally, was also a magick partner with Scientology founder L. Ron Hubbard. Cameron came to be involved with “Night Tide” as she had partied with co-star Dennis Hopper in the 1950s, and worked with Curtis Harrington and Kenneth Anger in 1954’s “Inauguration of the Pleasure Dome” — Anger was another Crowley devotee, who also knew Manson Family member Bobby Beausoleil. He later associated with Church of Satan founder Anton LaVey. To say that Cameron, Hopper and Harrington had connections to Crowley and the occult would be a mere truism, and that occult symbolism figures into “Night Tide” should not be considered a stretch.