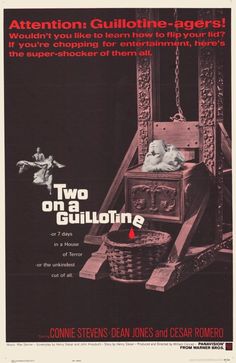 “Two on a Guillotine” is an effective little BW chiller when aiming for the scares, but when that’s not the case it becomes ponderous (the budding romance between the leads) and it in end too long-winded when it finally reach it very foreseeable conclusion. Still it’s entertainingly solid with able performances by the ever delightful Connie Stevens and a charming Dean Jones. They work off each other rather well and the script stays compelling within its mystery building or trivial exchanges. Some slow spots, but never that distracting.

In order to inherit her recently deceased father’s fortune, his only daughter (who hadn’t seen her father in years after an incident during a magic trick featuring her mother in a guillotine) must stay seven nights in his mansion. If not, the fortune is split between his carer and manager. Things soon get weird, but it hard to tell if it’s just games or the house is really haunted. Although he did promise to return from the dead.

The plot is a typical haunted house mystery (as nothing seems quite like what it is), but it’s well presented and exemplary photographed. Director William Conrad mixes successfully the playful elements (an acceptable light-hearted funny bone) with the creepy moments (where it can draw some intensity). Cesar Romero is quite good as the illusionist too.