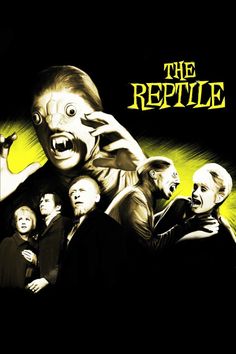 A young couple, Harry and Valerie Spalding, inherit and move into a small cottage previously owned by the husband’s now deceased brother, Charles. Charles’ death is something of a mystery, but none of the locals in the small Cornish village want to discuss it or any of the other deaths they’ve seen. Harry has seen some strange things in his time and believes that these deaths are similar to the cobra bite victims he saw in India. But a cobra in Cornwall – it’s not possible. The couple meets their standoffish and odd neighbor, Dr. Franklyn, and his charming, but strange daughter, Anna. The Franklyn’s are hiding a secret, but is it a secret capable of killing Charles and others in the community? Is there a giant, snake-like creature hiding in the Franklyn’s house?

Of all the wonderful movies that Hammer made, I’m of the opinion that The Reptile is one of the most often overlooked gems in the catalog. It’s a really nice movie that doesn’t seem to get near the attention I feel it deserves. Good acting from a rather small cast (with a big, meaty role for Hammer regular Michael Ripper), nice pacing, solid direction, and that Hammer “look” (for lack of a better word) that I always enjoy. But what really sets The Reptile apart is the atmosphere. There’s a real sense of fear and mystery about the whole movie. It’s as creepy and suspense filled as anything Hammer ever made. And I just love the whole notion of a snake-cult putting a curse on Franklyn and his daughter. It’s a unique, original idea for a movie. Sure, there have been other snake-to-man movies, but none that I’ve seen are as well done as this one. Finally, I’ve read complaints about the make-up effects. Personally, I think they’re fine given the relative modest budget Hammer put-up for the movie. The snake appliances may not look as real as one might have hoped for, but at least they’re not some weightless CGI nonsense. Just go with it and have fun.