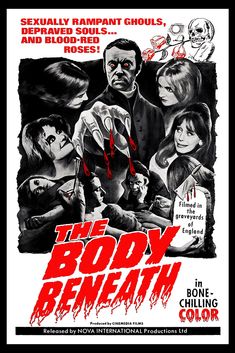 One rainy day in London on the edge of Hamstead Heath, there’s a knock at the front door of the Ford family home. Unknown to any of the Ford household, the Reverend Alexander Algernon Ford, is actually the head of a large family of ancient vampires also named Ford, who are on the hunt for fresh blood because of constant intermarriage between the vampires over the centuries has seriously diluted their blood line. The vampire “reverend” has his eyes set on a particular relative, Susan Ford, whom he plans to kidnap. He intends to indoctrinate her into his secret coven and use her as a breeder in order to stay in existence. How will Susan be savedTo say THE BODY BENEATH is a *GOOD* film might be sugaring things a bit heavily, but it certainly stands as one of the more professional achievements put forward by schlock auteur Andy Milligan.

The evidence of more technically adept workmanship than in many of his other projects is multi-directional within this eerie little vampire opus, though the the gore is noticeably slight this time around. It’s a fairly unembellished bloodsucker story with a few novel twists…a vampire-priest calls a meeting of all existing vampires at his Old England lair. During this meeting, he expresses his concern with the rapidly diminishing numbers of their blood-line, and motions that they move, collectively, to the United States.

THE BODY BENEATH looks like a project which Milligan took a bit more seriously than many of his other horror offerings. It’s fairly coherent(an amazing achievement for him), and the pacing and exposition actually aren’t miles away from the accepted norm. Is this merely a film which denotes the natural progress of it’s maker? Is it a sincere attempt to bring something palatable to mainstream horror film fans? Is it a sellout? …I dunno…all I can say is that it has all the quirky Milligan hallmarks, but it’s far removed from the schlock quality of much of his other work.