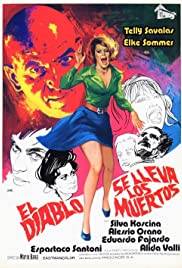 Lisa (Elke Sommer) who is a tourist gets lost from her group in an ancient Spanish city, but she come across a couple Mr Frank Lehar, his wife Sofia and chauffeur and gets a lift off them. Though, its short-lived as the car breaks down near an old villa. So they are invited to spend the night in the old, dark villa. The mansion’s occupants are acting all strange and the dreary atmosphere takes hold. One by one, they meet their doom and Leandro (Telly Savalas) the villa’s butler seems to have something to do with it. Could he be the devil himself who’s toying with these guests or is it all a nightmare?

Well, this was the first film I’ve seen of director/writer Mario Bava and I got to say I was truly amazed by it. Bava’s “Lisa and the devil” is a slickly well-crafted surreal thriller that messes with our minds with its simply fetching details and a disquietingly grim atmosphere. It’s one very picturesque film that holds superb composition and such flair in the lighting, backdrop, score and atmosphere. From the elegant scenery of the ancient city to the old fancy villa that holds such a morbid awe and to what builds on that is a strikingly eerie, but delicate score. While the brood atmosphere is sheer alienating and the fluid camera-work truly does capture that disorientating mood. The villa is covered with colourful artwork and luxurious furniture, which fills every room. The film is gracefully shot with plenty of zooms and also catching reflections and silhouettes. The location photography was excellent. These sublime images and score really built on the absorbing texture and peculiar state of the film. Plus under all that are an elegantly erotic undertone and a film that flows with pure originality.

Premise is incredibly absurd and there’s hardly no characterisation. Maybe there was too much going on in the flawed story, as it was downright confusing at times to know what was actually happening because the story would lead to a dead end. Overall it just felt like a blur. Though, yet again maybe it was meant to be like that? You are definitely lost and put off-balance just like Lisa is to what’s reality and what’s not. It’s a baffling mystery that you could say comes across as rich poetry and art and you also pick up on little subtle hints throughout the story. The dialogue is rather sparse, but interesting if a little cheesy at times. You could probably say not much is going on with Lisa just wandering around the villa and there’s a fairly slow pace to it all to begin with, but this is an atmospheric and physiological builder. Some scenes did drag on for too long and sometimes it gets a bit too sappy, but these things didn’t take away from the film. The horror isn’t that horrific, but it plays more on the images, sounds and atmosphere. Definitely the second half of the film is when it starts to get exciting and even more unnerving. This is when Bava tightens the screws with some well-designed shocks and jolts. By achieving some haunting images and a heart-stopping finale, literally. As each one the characters give into jealousy, hatred, lust and finally into their own demise. The characters turn out to be nothing more than pawns in this story and you question who’s pulling whose strings. Most of the acting does come across as rather one-note or melodramatic. Telly Savalas steals the film as a lollipop sucking butler, who seems to have some hidden agenda and playing with these people’s souls. His performance is sinisterly impressive in a manipulative nature and his dialogue is always a play on words. The gorgeous Elke Sommer shines in her role. Her dialogue might be pretty limited but her presence is enough to fit the bill.