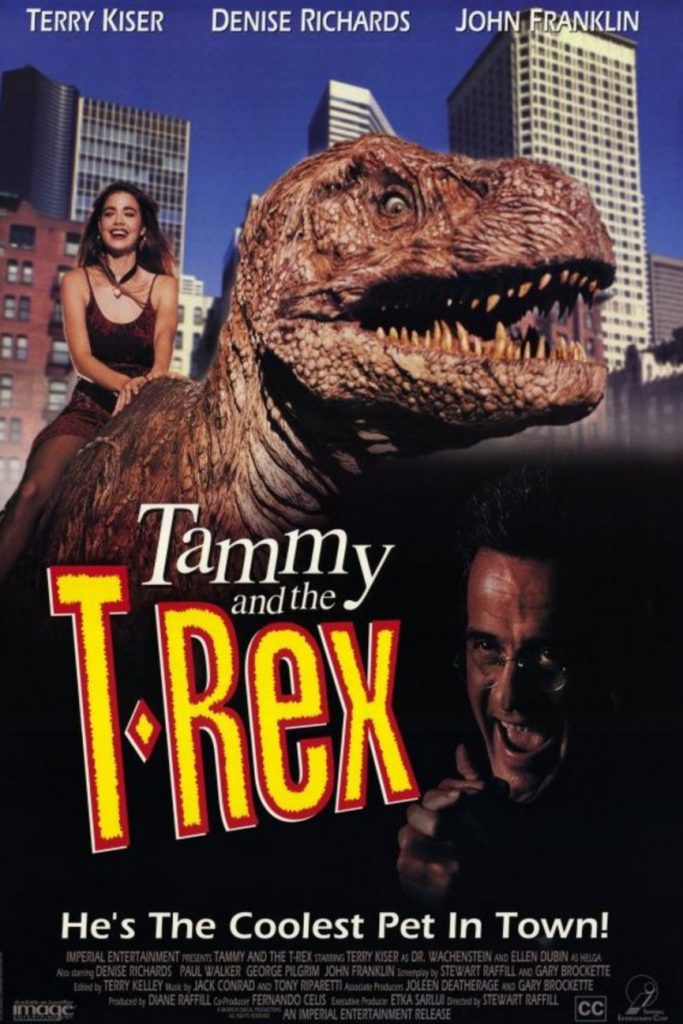 There are 2 kinds of bad dinosaur movies; the painful ones and the fun ones. This is one of the latter. I think Tammy and the T-Rex was kind of destined to be a guilty pleasure of mine from the very beginning. It hits so many notes for things I enjoy and resonate with, most of them subjective, that I just can’t help but love it. I love the 90s culture, I love dinosaurs, I love camp, I love Terry Kiser, I love Denise Richards and I love Beauty & the Beast stories. I was also a leather jacket wearing dork in High School who briefly dated a cheerleader at one point and have a flamboyantly gay close friend. This movie has all of those things and you’re telling me I’m not supposed to enjoy it? Yeah, right.

God damn it, I don’t care that the editing is laughably bad, with audio clips repeating themselves and scenes frequently ending abruptly and awkwardly. I don’t care that the story makes absolutely no sense, I don’t care if the film obviously uses a human actor in an obvious $20 costume whenever Michael/T-Rex needs to use his hands or we need a closeup on his moving feet, I don’t care that the cast overacts to a degree that John Travolta would be envious of (Actually, this may be a bonus.) I don’t care that the music feels like something off of a bad Power Rangers episode. Honestly, the only thing I really care about is the film’s censoring of its graphic and brutal violence. The cuts here are obvious and laughable, made for the sole creative decision of marketing to a dinosaur hungry young audience fresh off of Jurassic Park. Never mind that these are 2 completely different movies targeted towards completely different target audiences, apparently all dinosaur movies are the same. While Tammy & the T-Rex still retains a lot of the zany, bonkers humor and manic, over-the-top energy of the original vision, stripping it of its violence just makes it lose a lot of its identity.

I’m surprised how much I really dug the characters of this film. No, the acting isn’t the best (Or the 2nd best…Or the 3rd best…Or the 26th best), but I do really like these characters. Denise Richard’s Tammy is lovably bubbly and energetic, Theo Forsett’s Byron is charming and funny, Paul Walker’s Michael is a lot of goofy fun in the limited screentime he has and Terry Kiser chews the scenery as one of those deliciously overacted bad guys we just never get to see any more. I was surprised how emotionally invested I was in this admittedly horribly made film.

A big part of my enjoyment comes from just how much heart this film has. This is the kind of bad movie where everybody on board really believed in the product. Everybody in the cast & crew really wanted to be here and you can tell they had a lot of fun. You can’t help but respect the earnestness and humbleness of a movie with a crying T-Rex attending his own funeral. A movie that starts off with a cheer-leading team practicing to “Dinosaur Man” by Simon Stokes and the Black Whip Thrill Band (A song with lyrics like Dinosaur music inside my brain, Sometimes I feel like I’m gonna go insane”) It’s a very charming movie if nothing else and nobody can take that away from it. Not even repeating sound clips or a T-Rex with obviously human arms.

This joins Idle Hands as one of those insane 90s guilty pleasures that I would honestly love to remake. Turn it into a Troma Entertainment style Horror comedy exploitation like Tromeo & Juliet, Polutrygeist or Class of Nuke ‘Em High and this could honestly be really good for the kind of ridiculous, absurd, goofy schlock that it is. Come to mention it, taking the stoner comedy elements of Idle Hands would probably make this even more entertaining. I wonder how much it would take to purchase the rights for this.