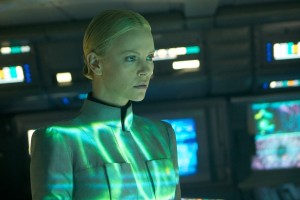 WHEN he directed Alien back in 1979, Ridley Scott’s game plan was simple: take a B-movie premise – a monster running wild on a spaceship – and dress it up with first-class actors, expensive special effects, a brooding tone cribbed largely from 2001: A Space Odyssey (1968), and plenty of blood and guts.

But the experiment got away from its creator: Scott couldn’t have guessed that his film would spawn three sequels (five, if you count the Alien Vs Predator spinoffs), nor that the continuing character of Ellen Ripley, played by the extraordinary Sigourney Weaver, would evolve into a figure closer to a full-fledged tragic heroine than a standard damsel in distress.

More than 30 years later, Scott has returned to the scene of his past triumph with Prometheus, which is something like a prequel to Alien – unless it’s a companion piece set in a parallel universe. Either way, the year is 2089, and the Prometheus is a spaceship headed to an alien planet on a mission aimed at uncovering the origins of humanity, or the secret of eternal youth.

None of the characters on board have anything like Ripley’s gravitas, but Scott has persisted with the series tradition of giving women central roles. Meredith Vickers (Charlize Theron) is the sleek, pragmatic corporate head of the expedition, while Elizabeth Shaw (Noomi Rapace) is the film’s vulnerable moral centre, an archaeologist who hopes to find meaning in outer space while retaining her faith in Christ.

By far the most memorable character is the soft-spoken android David (Michael Fassbender), the ship’s butler and a detached observer of humanity in general. Early on, while the rest of the crew remain in suspended animation, we learn he is able to spy on their dreams.

At the same time, we see him watching Lawrence of Arabia, then mimicking Peter O’Toole’s voice and gestures with fetishistic precision. It’s a tightly controlled, weirdly camp performance, hinting at a sterile yet alluring narcissism.

0 118
The Road Seldom Traveled: The Rise of The Community Movie Theater