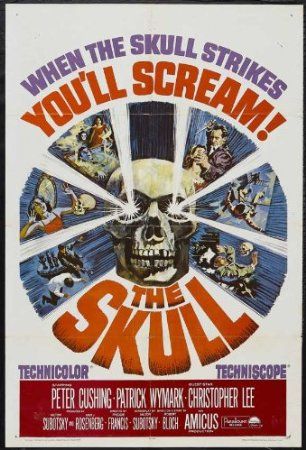 “The Skull” definitely isn’t on par with the other contemporary Peter Cushing and Christopher Lee pairings, from Hammer or Amicus or whatever other production studios, but it nevertheless remains an interesting and worthwhile slice of 60’s Brit-horror. Freddie Francis was always one of the most gifted horror directors in Britain and provides the film with a continuously gloomy and sinister atmosphere. Moreover, he was an even more gifted cinematographer and assures a large number of inventive shots (like, for example, a point of view from inside the skull), while the always reliable Peter Cushing gives away a marvelous lead performance. However, the film specifically struggles with two major shortcomings, namely a) the fact that the script is based on a short story (by Robert Bloch) and it’s not exactly fit for a long-feature film and b) the absence of an actual evil villain/monster of flesh and blood. Cushing depicts an avid collector of occult objects who obtains – illegally – the skull of the one and only Marquis de Sade. Fellow collector and former owner of the skull Christopher Lee attempts to warn his colleague about the mysterious and psychedelic forces homing inside the Marquis’ skull, but naturally he doesn’t listen. During the first two nights of the next new moon, however, he dramatically learns that the skull turns its owner into a helpless murder-committing marionette. I haven’t read Bloch’s short story, but I presume something went wrong during the processing into a movie screenplay, as there a few too many dull moments and a lack of clarity regarding the skull’s incredible powers. The intro, a certain dream sequence and a few flashbacks are extraordinary (what is it with the English and foggy cemeteries). The climax is rather silly instead of frightening, with the skull floating around with the help of clearly noticeable strings as well as grotesque camera gestures and color patterns. Cushing and Lee obviously steal the show, but keep also an eye open for two genuine British cult heroes in minuscule roles: Michael Gough (“Horror Hospital”) and Patrick Magee (“A Clockwork Orange”).