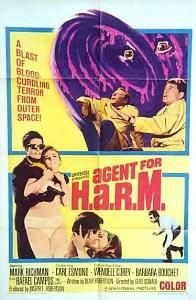 A paunchy, fiftyish sleazeball is…agent for H.A.R.M! He hits on girls young enough to be his daughter! And cops a feel while he’s got his hands on them! He’s smug, ineffectual, pompous and smarmy. The only reason he half way succeeds in his mission is because the bad guys are so lame. And he still managed to botch the case. That’s what he gets for leaving that one location! And for some reason, his yellow cardigan didn’t protect him. That must be the reason why he wore it for six straight days in a row, right? I must say-I’ve never seen a secret agent who wore a CARDIGAN before. Only grandfathers wear cardigans. Couldn’t they have gotten a better wardrobe person for this movie? I mean, they saved all that money on the location scouting, they could have afforded to hire someone who wouldn’t have put grandpa secret agent in a yellow cardigan!