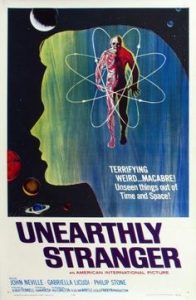 Filmed in stark black-and-white with virtually no visual effects, “Unearthly Stranger” relies on sheer dramatic power to tell its story of an alien plan to sabotage Earth’s developing ability for space travel. The film is written and directed with care and performed with a conviction that brings across the suspense and humanity of this story in a way rarely seen in the genre.

Many of the filmmakers would soon be working on TV’s “The Avengers”, including producer Albert Fennell and director John Krish. Fans of that series will also recognize many familiar faces among the cast. The strongest performances come from John Neville, distinguished stage actor and teacher, and the almost-unknown and very beautiful Gabriella Licudi who, in the title role, brings the concept of interplanetary communications to an entirely new level.

The odd man out in this production is certainly scenarist Rex Carlton. On the basis of this film, it is almost inconceivable that he is the same man responsible for the lurid “Brain That Wouldn’t Die” and “Blood of Dracula’s Castle”, among others. One is tempted to give credit to Jeffrey Stone, who penned the original screen story. But this is a claim that’s impossible to support, because Stone was involved as a writer on no other films. So, one can only say that none of Carlton’s other screen work would ever approach the level of this, his most subtle and affecting accomplishment.