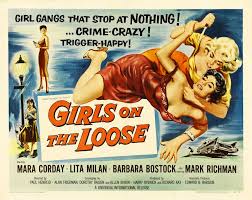 Interesting Universal programmer from the late Fifties. This would be a standard heist (or should I say “post heist”) movie if it weren’t for the fact that the gang of crooks is all female. U-I contract player Mara Corday plays the hardened gang leader undone by her feelings for her naive younger sister, the sort of part Bogart or Raft might have played in an old Warner Brothers crime film of the thirties, except for her slightly more lascivious edge — Corday wants what she wants whether it’s money or the new delivery boy. Directed by Paul Henreid, best known as Ingrid Bergman’s husband in CASABLANCA. All in all an interesting little thriller with some neat twists, definitely worth checking out.