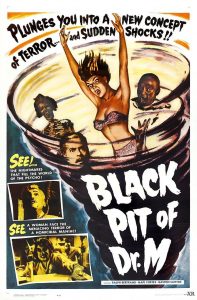 Given a complex and fascinating plot to work with – which has only the briefest concession to camp and, uncharacteristically for a horror film, is teeming with male protagonists (five, while there are only a couple of females of any importance) – a balance is reached between its intended literariness and the trademarks of the genre: foggy atmosphere, evocative décor and a bombastic yet effective score. The presence of Dr. Aldama’s ghost is quite subtly but effectively established; besides, both Dr. Masali’s expressionistic execution scene and the surreal first encounter between the two young lovers are stylishly realized – while the vicious attack of the manic woman and Elmer’s resurrection emerge, perhaps, as the film’s horror highlights. Furthermore, we get vividly essayed portrayals by the suave Ramon Bertrand as Dr. Masali and Carlos Ancira as Elmer – the latter, a cross between Dwight Frye and Peter Lorre (and helped by some splendid make-up), could well give the classic monsters a run for their money!

Though Masali and the young doctor (played by Gaston Santos) both vie for the girl’s affection, there is very little rivalry between them let alone plots for revenge – as the film stresses Dr. Masali’s single-mindedness in his search for knowledge regarding the afterlife. The asylum setting – and especially the imagery of outstretched hands through the bars of the cells – recalls BEDLAM (1946), while the hypnotic effect the music box has on the mad gypsy woman brings back memories of Bunuel’s Mexican black comedy THE CRIMINAL LIFE OF ARCHIBALDO DE LA CRUZ (1955); also the scene where Masali/Elmer is discovered strumming on the violin is reminiscent of the Ape Man at the piano in RETURN OF THE APE MAN (1944)! There is one flaw with regards to the plot, however: it’s inconceivable that, even if Masali was discovered locked in with the woman’s corpse, no one suspected Elmer of having killed her for disfiguring him! Other amusing flubs include the scene in which the ‘monster’ – engulfed in flames – pauses to open a door before exiting a room screaming, the fact that the gypsy is able to effortlessly hurl a massive cupboard at the asylum orderlies confronting her, and the shot – accompanied by a histrionic single note on the soundtrack – early on where Dr. Aldama’s coffin is opened prior to burial, almost as if to assure us that it is he…but, other than that, this particular sequence is comparable to the opening moments of James Whale’s FRANKENSTEIN (1931)!