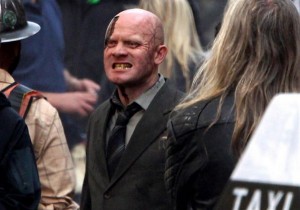 The road to get the big screen adaptation of the Max Brooks novel World War Z into theatres has been as bumpy as we have ever seen. Prop seizures. Reshoots. Rewrites. You name it, this production has suffered through it. Insiders close to the flick have already started dishing dirt.

The Hollywood Reporter recently ran an article in which said insiders fill in some of the blanks of exactly what happened that sent this project flying off the rails.

“A nightmare from top to bottom,” describes one source with ties to the production, which appears to have been hampered from the outset by a lack of clear creative direction. Pitt hired the director of his choosing, Marc Forster (The Kite Runner, Finding Neverland), but Forster — who has limited experience on effects-heavy tentpoles — was not allowed to bring along his usual team. Instead, several more seasoned players were hired. The result, say multiple sources, is a seemingly headless enterprise driven by conflicts. At this point, the movie, with a price tag now said to be north of $170 million, needs as many as five weeks of complex reshoots, which are not expected to get under way until at least September. Paramount has taken the unusual step of hiring Prometheus scriptwriter Damon Lindelof to rework the film’s third act. The studio announced in March that it was moving the film to June 2013 from December.

Trouble emerged early: Three weeks before shooting was to begin in June 2011, sources say Forster had not made critical decisions about what the zombies would look like and how they would move. “They just couldn’t get it right,” one insider says. “There was a lot of spinning of plates, a lot of talking. [But] they did not have a plan.” Meanwhile, seasoned below-the-line talents were hired, then replaced, including line producer Colin Wilson (Avatar) and Oscar-winning effects man John Nelson (Gladiator). Cinematographer Robert Richardson, who has three Oscars, is said to have asked to leave the production on more than one occasion. (None would comment for this report.)

World War Z is one of several recent projects that underscore the risks associated with big effects films, especially when untested directors are involved. Disney saw first-time live-action director Andrew Stanton’s John Carter bomb in March, and Universal is facing serious problems with the $175 million to $200 million Keanu Reeves samurai film 47 Ronin, which it pushed into 2013 after first-timer Carl Rinsch presided over a chaotic shoot. Industry veterans say World War Z is another example of a film that was greenlighted and sent into production with a concept and script that were not fully baked. And they cite this situation as one of many in which studios set release dates and then push to finish in the timeframe allotted, leaving insufficient prep time.

In Paramount’s case, World War Z is the third film — along with Hansel and Gretel: Witch Hunters and G.I. Joe: Retaliation — to be shoved out of 2012, leaving the studio with just a trickle of movies for this year. Sources involved with the project believe it was assured a greenlight because of the longstanding relationship between Pitt and Paramount chief Brad Grey, who once managed the star and was a partner in Pitt’s Plan B production company. (When Grey took the job at Paramount in 2005, Plan B promptly moved there from Warner Bros.)

Paramount insulated itself on World War Z to some degree by taking on partners, including producer Graham King and Silicon Valley scion David Ellison’s Skydance Productions. Sources say both made efforts, to little effect, to intervene as the movie got into trouble.

Several sources question Pitt’s choice of Forster to direct. The only film on Forster’s résumé in the action vein is the 2008 James Bond movie Quantum of Solace, which disappointed creatively compared to its immediate predecessor, Casino Royale. Sources with ties to World War Z say the hope was that Forster could focus on character and story while a strong crew could guide him on action and effects. Among those brought on was Simon Crane, the second-unit director who helped to salvage Pitt’s 2005 film Mr. & Mrs. Smith. But even Forster’s detractors say the attempt to bolster him created its own problems.

“The director was not empowered,” says one insider. “There was nobody that steered the ship. … When you get [a director] who can’t do it all … you get a struggle as to whose is the singular voice.”

There were other problems. As the movie was being prepped last spring, Pitt and his producing partner, Dede Gardner, were busy with Killing Them Softly, a small film that played Cannes in May. Then Pitt was unavailable because he was spending time with his family. By the time Gardner began to focus on the project a few weeks before shooting, a source says, “the disaster was already well in the making.” (Gardner, Pitt and Forster did not respond to requests for comment.)

It was unclear to several people working on the film whether Paramount was fully aware of the mounting issues, including the insufficient time allotted for the shoot. While Crane is said to have wanted 60 days or more for second-unit work, for example, the schedule called for about a third of that. Some insiders expected that Pitt could use his influence with Grey to get more time and money, but sources say the studio provided neither. Instead, it replaced key crew members such as line producer Wilson. (Ian Bryce, whose credits include Transformers, took his place. Wilson did not respond to a request for comment.)

As the production wended its way through locations in London, Glasgow, Malta and Budapest, there was still more trouble. By several accounts, cinematographer Richardson struggled to impose order, antagonizing other crewmembers in the process. A colleague says Richardson is highly gifted but doesn’t respond well to weakness at the top. “If you waffle at all, you get slammed,” he says.

Then in October, proceedings were disrupted when a Hungarian anti-terrorism unit raided an airport warehouse and confiscated 85 fully functional automatic assault rifles that were to be used on the shoot. (The guns were not supposed to be operational, and it is illegal to transport such weapons into the country.) With the movie already behind schedule and over budget, Pitt was said to be livid at the mistake — and perhaps wearying of a project that was showing no sign of ending.

While such significant problems do not ordinarily augur well, it is possible to pull troubled movies back from the brink. (The Bourne Identity is one vivid example.) “The footage from this film looks fantastic, but we all agreed it can have a better ending,” Paramount film group president Adam Goodman tells The Hollywood Reporter. “Getting the ending correct is essential, and we are in that creative process. World War Z is a giant summer movie, and we are confident it will be a global hit when it’s released June 2013.”

Another source associated with World War Z says he believes the movie can be saved. “It’s a great first 45 minutes, maybe even an hour,” he says.

And in that January interview, Pitt seemed sure the movie would find at least some enthusiastic fans. “I know my boys are going to like it,” he said. He seemed less sanguine, however, about the prospects for a trilogy.

Keep it here for more as it comes.