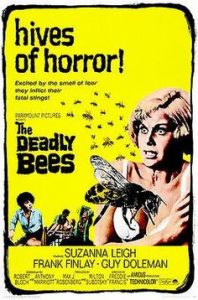 “Psycho” author Bloch co-writes and the renowned director / cinematographer Francis directs this entry into killer bee cinema that predates the 1978 flicks “The Swarm” and “The Bees” by almost a dozen years. It may work for viewers if they approach it as a camp film but the truth is, it’s too silly to be all that successful. The bee attack scenes really aren’t bad (the actors certainly sell the hell out of the material), but they’d be better if the (not so) special effects weren’t so hilariously unconvincing. The story, based on a novel by Gerald Heard, deals with a pop singer named Vicki Robbins (Suzanna Leigh), who suffers a mental breakdown and is sent to the idyllic, rustic community of Seagull Island for much needed R & R. Unfortunately, things there are going to get ugly as rival bee keepers engage in cutthroat competition. Bees are being sent to do some serious damage to various unlucky human victims. All in all, this viewer would consider this a lesser effort for Amicus Studios. The company always fared best with their omnibus features; their single story features were never quite as strong. Still, this is all fairly watchable regardless; sincere performances really help a lot. The pretty Leigh is engaging as a resourceful lead, but the show really belongs to Frank Finlay and Guy Doleman as the warring farmers, H.W. Manfred and Ralph Hargrove respectively. A fine supporting cast includes Catherine Finn as Hargroves’ neglected wife, Hammer and Amicus regular Michael Ripper in a solid turn as part time barman and part time lawman David Hawkins, James Cossins as an investigating coroner, and the appealing Katy Wild as the helpful Doris Hawkins. There’s also the chance to see a musical performance by rock group The Birds (not to be confused with American group The Byrds), featuring a young Ron Wood. The movie further benefits from a good score composed by Wilfred Josephs and a reasonably rousing and fiery finish. While it isn’t particularly good, it isn’t all that bad, delivering some fun moments and coming in at a short enough 84 minute running time.