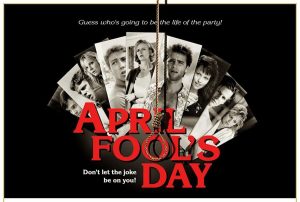 Definitely not the typical slasher fare you might expect from the 1980s, April Fool’s Day takes the ordinary slasher formula and spices it up – and in the process makes a much more palatable film than most of the films it initially imitates. A group of nubile teens(OK, not so different to begin with)go to their friend’s remote island home somewhere in the Northwest. Here, they laugh, have sex, joke around because it is April Fool’s Day, and, oh by the way did I mention, have sex. Although this part of the movie is pretty typical, it is well-shot compared to other films of its ilk and we do get some character development(not a lot) but some. Soon, people begin to die and things get serious. For a slasher film, this movie is very well-paced and, more importantly, is not over-the-top in blood and guts. The acting is uniformly average(something a Friday the 13th films craves!). What really takes this film beyond the mundane; however, is the stylish twist at the film’s end. This, almost all by itself, allows this film to rise in the ranks. The ending is deftly done and does not look foolish or silly or forced; all of these things could have easily happened. So if you are up for some slasher fun, want to see some nice looking girls(Deborah Foreman and Deborah Goodrich), and are intrigued by a creative ending – April Fool’s Day is for you!