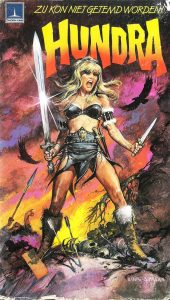 What I think I enjoy most about HUNDRA is that it feels like a horribly misogynistic film with a main character who didn’t get the memo and proceeds to rebel against the script and film itself as the ultimate icon of women empowerment. It would be one thing if the men were just abusive and sexist, but the fact that Hundra’s destiny is to find a nice man and get pregnant, and that she’s cool with it, means the women don’t seem too keen on fighting this imagery. When Hundra first comes face-to-face with Pateray (Ramiro Oliveros), a healer in the city of men where she spends the second half of the film, and he turns her away because he’s not the type of dude to randomly sleep with any woman who comes crashing through his roof, her response is to allow herself to get captured and imprisoned in the temple where she knows she’ll receive training in proper use of lipstick, eye shadow, and forks. If Pateray won’t have her as is, she’ll doll herself up and make herself a proper lady. It feels like a major tonal conflict with literally everything else in the movie. I mean, this is the same woman who routinely spits at the very idea of allowing herself to get close to a man and spent a previous scene blowing off some steam by giving a potential rapist the beating of his life. It could just be that I’m having a hard time understanding what it is this movie is attempting to tell me (and, keep in mind, this came out in 1983…it was a different time) and I’m just infinitely amused at how this is the most misogynistic “girl power” film I’ve ever seen.

This isn’t your average low-budget fare either. The production value on this film is actually pretty impressive for what it is. The production design and costuming were commendable. The fight choreography, not so much. Most of the fights were more humorous than heart-pounding, with blows flying slowly and uncoordinated. But we get plenty of them. Hundra is, after all, a warrior. And Laurene Landon is giving it her all, even if her performance is wooden. I think because her heart is in it as much as it is, I found it easier to forgive the fact that she wasn’t the greatest actress. Few people in this movie are, with exceptions for Ramiro Oliveros (who was genuinely decent) and Luis Lorenzo (who gave a scene-chewing performance as the high priest’s adviser in charge of sex slaves). All combined, I suppose HUNDRA is on par with your average cable TV movie but just a little crazier. HUNDRA was written and directed by Matt Cimber, and I love when low budget movies are written and directed by the same person (bonus points if produced as well) because it means there’s a lower chance that someone will stand up to them when things just aren’t working. It’s how I choose to explain scenes such as Hundra’s random battle with a painted dwarf on a pony wielding a pitchfork and Hundra’s naked, horseback jaunt along the beach that, again, seemed to serve no purpose other than to increase the film’s level of nudity. Cimber thought they’d be iconic scenes and add legitimacy, but they’re memorable for the complete opposite reason.

Striving to be more than it is, HUNDRA falls short but manages to entertain in spite (and perhaps in part) of its shortcomings. Of the half dozen Z-grade movies I’ve treated myself to recently, HUNDRA is probably the only one I’d be willing to acknowledge as genuinely entertaining and not just schlocky fun. The plot’s a little stupid, the messages seem confused, and the tones are all over the place (the rapist beatdown is accompanied by music suitable for the sweetest scenes in THE PRINCESS BRIDE) but despite all that, Hundra is a strong female presence in a movie that tries its hardest to whip her in line. Hundra may be destined to get pregnant to save her kind, but she’s doing it on her terms. I enjoyed watching her battle against the tyrannical world of men and I’m frankly a little surprised this one doesn’t have more of a cult following.