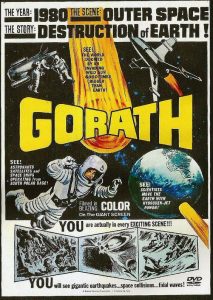 This Japanese take on the kind of story first pioneered by “When Worlds Collide” and done less effectively in later years in “Meteor”, “Armageddon” etc. has been called Toho’s greatest sci-fi movie ever by some. It’s certainly a fairly intelligent effort overall, done with top of the line (for its time) FX. I was glad to see it in its original Japanese format, widescreen with subtitles (and with the rather pointless scene involving giant walrus Magma) and found it quite entertaining overall, certainly the equal of “When Worlds Collide” and light years ahead of the American takes on the story that followed. My only quibble was why Gorath was referred to as a “star”, when it is clearly too small to be so categorized, and should have been referred to as a runaway planet (was Toho afraid of getting sued for ripping off “When Worlds Collide” if they categorized it as a planet?).

Fans of the wonderful 1960 disaster movie “The Last Voyage” will recognize George Furness, who played Third Officer Osborne in that film, as the UN Secretary-General. Furness was a lawyer living in Japan who had enough acting talent to not only play westerners in Japanese movies, but to get good roles in American movies shot in Japan like “The Last Voyage” too.