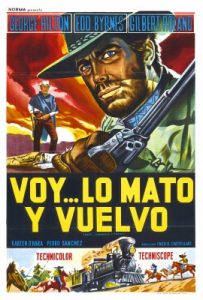 Three men looking for a hidden loot , they are : A cynic bounty hunter (George Hilton) going after the reward , a Mexican outlaw named Montero (Gilbert Roland) with a band of fanatic hoodlums (Ignacio Spalla, Riccardo Pizzuti, Jose Torres, among others) , besides a greedy bank clerk (Eddie Byrnes) and an insurance agent (Gerard Herter).

This is a cool Spaghetti Western in Leone style . The movie takes parts from ¨For a few dollars more¨ and especially ¨The good , the bad and the ugly¨ . The film is plenty of action , fun , shootouts and results to be a surprise-filled entertainment . The picture contains funny gun-play along with fist-fight very much in the Terence Hill/Bud Spencer territory . The violence isn’t crude but it suits light-weight comedy fun , though no silly slapstick like the ¨Trinity and Bambino¨ series . The movie is starred by habitual Spaghetti as George Hilton (Sartana) , Gilbert Roland (Sonora, Goldseekers , Johnny Hamlet), Edd Byrnes (Seven Winchester for a massacre) , besides ordinary secondaries : Pedro Sanchez or Ignacio Spalla, Gerard Herter , Sal Borgese , Jose Torres.. The picture displays crazy characters with twists plots and is quite amusing . In addition , a really catching score musical by Francesco De Massi . Enzo G. Castell in his first film and original Western makes a nice camera work with usual zooms and clever choreography on the showdowns , after he made more Western as ¨Johnny Hamlet¨ , ¨Tedeum¨ , ¨Kill them everybody and came back alone¨, ¨Seven Winchester for a massacre¨ , ¨Cipolla colt¨ and the masterpiece : ¨Keoma¨. Some of them are serious , others are goofy and plenty of slapstick and slapdash . This is a straight-forward story , funny in lots of parts and it will appeal to Spaghetti Western fans.