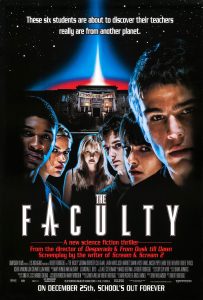 Herrington High School in Ohio has the usual groups of disaffected youths  the jock, the goth, the geek, the prom-queen, the drop out etc. However they are not the only ones acting out of the ordinary  the teaching staff all seem to be acting out of the ordinary  drinking water, acting sinister. Geeky Casey has the idea that the staff have been infected, taken over by aliens using their bodies as hosts. Casey’s theory spreads to a group of students who decide to take a stand.

Oh my God  an enjoyable and quite clever teen movie! Something must be wrong! The plot is basically a teen twist on The Invasion of the Body Snatchers, but is filled with clever references and jokes related to sci-fi. This makes it stand out from other teen movies in that it cleverly plays with the usual stereotypes and makes them feel fresh. The group itself is close to the usual group that learns to get along and accept each other (a la Breakfast Club)  except here they get along through drugs and the battle against aliens!

The director is better known for his big OTT action stuff but here he does a good job with a slow build up and a real feeling of paranoia. Of course it’s not as good as the actual Body Snatchers but it still has a real good feeling of fear and tension. The effects are good but Rodriguez uses them sparingly for the most part helping the mood of uncertainty and fear.

The cast are all good. The teens play the stereotypes well but they are outshone by the adults who all get to ham it up in sinister roles. Many of the adults are wasted in minor roles  Hayek for one is barely in it, and MacDonald deserves more than a few minutes. Patrick is very good considering that it could have easily been his T2 role again  running in that distinctive way etc, but he is suitably sinister. Janssen is also good  transforming from a shy flower into her usual vamp. Cameos from Usher, Summer Phoenix and a seemingly pointless role for Harry Knowles (he’s been bought!) don’t spoil this.

Overall as a sci-fi horror it’s pretty good if not great  there are better films around. But as a teen movie it is head and shoulders above the rest of this rather sorry genre and has enough tension, drama and references to be very enjoyable.