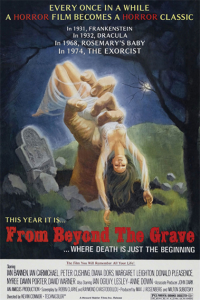 A superb slice of vintage British horror from Amicus productions, which although headed by two Americans Max J. Rosenberg and Milton Subotsky, Amicus was based in England at Shepperton Studios. I personally am a huge admirer of the work of Milton Subotsky, I think he gave a great deal to the British film industry and gave us the ‘portmanteau’ style of horror film which meant that the stories would be around half an hour long, it was impossible to tire of such a short subject! Milton himself claimed that the classic ‘Dead of Night’ was the inspiration behind these multi segment horror films and I think he took it to another level. I think that ‘From Beyond’ is the finest one they made, with atmospheric stories and great acting from the entire cast and of course the wonderful Peter Cushing as the mysterious proprietor of ‘Temptations Ltd’. Peter was the actor most used by the studio, he being very reasonable by way of his fees, whereas Subotsky claimed the great Christopher Lee became too expensive!