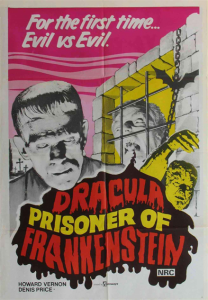 This Franco product, also known as Dracula CONTRA FRANKENSTEIN is perhaps one of his most seen films because with a title like this, people are going to check it out. In what was rumored to have been his attempt at a HOUSE OF Dracula remake, Dr. Frankenstein (Dennis Price) brings Dracula (Howard Vernon) back to life so that he can use him as a slave. At the same time he creates a monster and soon everyone is doing battle as a female vampire (Britt Nichols) also shows up. Oh yeah, a werewolf shows up out of nowhere as well. Those going into this expecting a pure homage to the early Universal films are probably going to be disappointed because this aspect of the film doesn’t happen until the final five minutes. For the most part this film comes off as an attempt for the Spanish director to make a silent film because there’s very little dialogue here. I’ve heard some say this was to make the film more marketable around the world but I doubt this since dubbing wouldn’t have been that big of an issue. The film doesn’t really work for several reasons but the biggest is that it’s never quite clear what’s trying to be done. As I said, the first seventy-five minutes features very little action while the final five minutes goes into overdrive in terms of camp. The final showdown between Frankenstein’s monster and the werewolf is bound to get many laughs as it’s extremely funny especially the sequence where the werewolf goes to jump on the monster but misses. The fake bats used here are among the worst I’ve ever seen and why Franco uses a real bat shown drowning to death is beyond me. The make up on the monster is pretty bad but it’s unique in a strange way. Vernon looks the part of Dracula but he doesn’t really do too much. Price, who would die the following year, doesn’t look too good as he comes off ill and doesn’t get to do that much either. Nichols is always easy on the eyes even though she actually doesn’t get naked here for a change. In the end, most people are going to find the film extremely boring and I really don’t blame them. I do respect what Franco was going for in regards to the silent nature of the film but in the end it just doesn’t work.